Ali Winters was born and raised in the Pacific Northwest where she developed her love of nature, animals, and all things green.
For as long as she can remember, she’s been mesmerized by the extraordinary world of books and fantasy. There has never been a time when stories were not begging to be told, either by drawing, photography, or writing.
With encouragement from one of her favorite authors, she jumped in, head first, to pursue the career that had been calling to her since the day she opened her first book.
She has a deep love for coffee, tea, warm blankets, dogs, creating art in any medium she can get her hands on, and family.

The balance of life and death must be kept at all costs.  Having been a reaper as long as she can remember, Nivian knows that what she does is essential in maintaining balance. After being assigned to a rushed mark she finds that there is more to this human than any other she has encountered.Kain had been living an ordinary life without a second thought until he meets Nivian who turns his world upside down. He is thrust into a world of hunters and reapers. The keepers of life and death have been feuding for centuries over a reason no one can even remember.  With Kain having been marked for reaping, and Nivian being hunted, they forge a friendship and together must find the truth in order to keep balance in check. Wrong choices could destroy everything. As they journey they discover hidden histories, powers, and lies and truths that have been spun since the beginning of time. The consequence of failure, unimaginable

Balance has been restored. Nivian is enjoying the peace of her existence once again, with the added perk of her best friend to show her what it is like to be alive. Hunters and Reapers are now working together again for the first time in millennia.

With the stress of a new shift threatening to rip the veil between realms, Silas’s disappearance, and her lack of memories from her life haunting her dreams, Nivian begins to pull away from Kain.

When the balances starts to shift out of control at a dangerous rate, Nivian and Kain must find the cause.  If they don’t, the world as they know it may change forever.

Being a Reaper has its perks, but also has its downsides. While on assignment, Evander is caught off guard by an unmarked human. Captivated he is unable to tear himself away. This is why Reapers don’t associate with mortals. Piper was ordinary, just a girl looking for love. All she knows is that her current boyfriend isn’t it. An unfortunate incident and a series of remarkable events turn her world upside down. But what she finds in the chaos that ensues is the last thing she ever expected—falling for the least likely candidate.7.3k
Buy link:
http://amzn.to/2b5oMOX

A case of mistaken identity triggers a reign of terror. A Star Princess of Soleis, bound by tradition, is forced to fulfill an arrangement made prior to her birth. During the Tauri masque, Oriana meets a handsome stranger, but soon finds out he is not who she thought. Prince Lucian, unfamiliar with the treaties of the Universe, must restore the reputation of his world and prove his kingdom is not behind the attacks. No one knew an innocent mistake could lead to the destruction of the solar system. Worlds are conquered, lives torn apart, and destruction reigns, while Oriana, unknowingly, holds the key to salvation. Now, a Princess who needs saving must save herself, the man she loves, as well as the rest of the Universe, before it is destroyed beyond repair.

Army of the Winter Court
Blurb:

The heart and blood of life will give rise to the final army.

Evvie Hewett is human. Or at least she thought she was. An encounter with a handsome stranger turns her world upside down in an impossible way and everything she thought she knew about herself has changed. Her history holds the key, not only to her future but to the future of the darkest kingdom in existence.

Thrust into the middle of a rivalry between two brothers for the Unseelie throne, she must decide who to trust, and who not to. However, knowing who to trust has never been more difficult when one brother wants her heart, the other, her blood.

She holds the key to the creation of the ultimate army. Threatened at every turn, she must find the truth before she loses her heart, and her life. Can she see past the lies and deception to stay alive, or will she fall victim to an ancient feud?

Buckle in and hang on with Award Winning and New York Times & USA Today bestselling authors! The Skeleton Key Boxed Set is a collection of 12 Fantasy Romance novellas, and all 12 Intriguing Stories include the Mysterious Skeleton Key.The SK stories are chock-full with magical creatures from dragons, powerful angels, royal elves, and enchanting elementals to a time-traveling sorceress, sensual vampires, and frisky fae. These authors transport the reader to an exciting new world with their sword and sorcery, action and adventure, dark fantasy, and spellbinding romantic comedy stories!Skeleton Key books included in this set:1. Eunica by J. Rose Alexander2. Curse of the Undead Dragon King by Konstanz Silverbow3. Army of the Winter Court by Ali Winters4. His Immortal Kiss by Liliana Rhodes5. Fate of Elements by M. Stratton6. Thief of Sanguardia by Cherie Marks7. Spell Slinger by K.N. Lee8. Princess of the Damned by Wendy Knight9. Royal Enchantment by Lia Davis10. Love in Fantasy by Elle Christensen11. Game Master by Scarlett Dawn12. Eternal Night by Marian TeeThis Skeleton Key boxed set is only available for a limited time!

Meet the complicated men behind
the sexiest boy band in America!

Blurb
Bodhi McKnight has always had everything handed to him on a silver platter: fame, success, money, girls. The raven-haired, blue-eyed hottie is the son of Hollywood A-listers, and when he’s asked to join the boy band Virtuous Paradox, his star shoots even higher. But so do expectations, leading Bodhi down a destructive path of addiction—until a drop-dead gorgeous guardian angel shows him her sizzling brand of tough love.

When Bodhi ends up in rehab, he doesn’t expect to meet someone as cool and down-to-earth as Kimberly Gordon. Although he’s enjoyed the company of beautiful, charming women before, none of them have tried to get to know the “real” Bodhi. But Kimberly isn’t fazed by his stardom. She’d rather go horseback riding, teach Bodhi to play guitar, or ask him about his feelings. Soon Bodhi realizes he’s fallen head over heels for her. He just hopes that he’s strong enough to protect what they have from all the pressures and temptations of the outside world.

Includes a special message from the editor, as well as an excerpt from another Loveswept title.

Heidi McLaughlin
Originally from the Pacific Northwest, she now lives in picturesque Vermont, with her husband and two daughters. Also renting space in their home is an over-hyper Beagle/Jack Russell, Buttercup and a Highland West/Mini Schnauzer, JiLL and her brother, Racicot.

When she isn't writing one of the many stories planned for release, you'll find her sitting court-side during either daughter's basketball games

Heidi's first novel, Forever My Girl, is currently in production to be a major motion picture.

Paige Turner - A 28 year old widow who owns a bookstore called Chasing Pages meets someone unexpectedly after two years of her husband’s death. Little does she know he's the one who writes her favorite novels and has a secret he is keeping from her. James Diamond Parker AKA J.D. Parker - is a horror novelist who is having a signing at Paige's book store. The first glimpse of Paige and he instantly feels a connection with her. Love begins to brew between the two of them, yet there is something James is keeping from Paige, something that will change everything between them. Will the secret destroy their newly founded love, or tie them closer together? 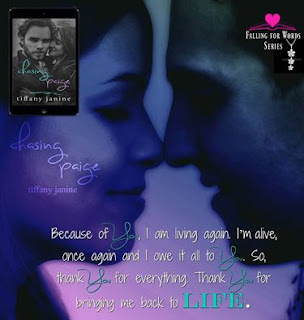 
I’ve had such a wonderful time with her tonight, time simply didn’t exist. “Come, let’s get going.” After she grabs her purse, I again take hold of her hand and lead us back to the car. We become quiet, as we get closer. For the life of me, I’m not ready to take her home. I feel this night shouldn’t end. I don’t want it to. Before I open the passenger door for her, I swing her little body up against the car, and take control of the moment. I palm her beautiful face and connect our lips. In an instant, her arms wrap around my middle and she squeezes me. Good, God, I could take her right now. I hear a slight whimper as our tongues ravish each other and it only makes me deepen the kiss. She feels so good. The aftertaste of wine blending in with mine does crazy things down below. Our bodies melt into one as we continue kissing. I bite, and suckle that bottom lip of hers, I’m not so sure I’ll ever have enough of her. I could do this forever.
My eyes stay closed, our noses touch, and our lips slightly disconnect when I breathe out and tell her, “Come back to my place. I’m not ready to let you go just yet. Please.” Our breathing and the beating of our hearts are all that I’m hearing. I pray she comes home with me.
As I keep my hands cradling her face, she brings her hands up, and wraps them around my wrists. Her breath lands on my lips when she answers back, “I’m not sure…this is going way too fast.”
As much as I want to take her to my bed, I don’t want to scare her off. I want to do this right. If she’s not ready, then I’ll wait as long as need be. Kissing her lightly on the lips I say, “I promise, if you’re not ready, we won’t do anything but talk.”
“That’s the problem. I don’t think I’m going to want to just talk.”
“And that’s a bad thing?”
“Very.” She nods. Looking up into my eyes, I see the hesitance, yet I feel the fire between us. “My body is reacting faster than my brain. It has a mind of its own, and if I go with you, I’m afraid I won’t be able to stop myself.”
“Then don’t stop,” I whisper. My hands move away from her face, and travel down to her hips, pulling her forward against my body, and kissing her once again. She moans inside my mouth and immediately snakes her hands behind my head, deepening the kiss. No doubt, she wants this as much as I do. Once our lips part, our foreheads remain touching. “I’m not ready for this night to be over.”
She sighs, “Don’t you have to be up early for the airport?”
“I’m an early riser anyways. And a night owl.” I smirk.
“James–– ”


I cut her off by placing my finger on her lips. “Don’t make me beg. Come back to my suite.” What happened with letting this ride out and not wanting to scare her off? Pressuring her is the last thing I want, but my gut is telling me to not let her get away. Once I’m on that plane, who knows when we’ll see each other next? With all my signings, and TV appearances it could be a month before she’s in my arms again. 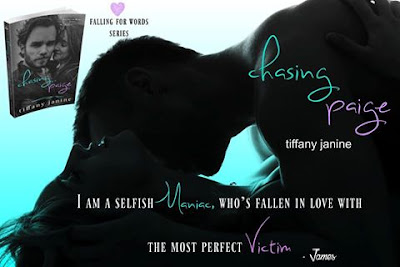 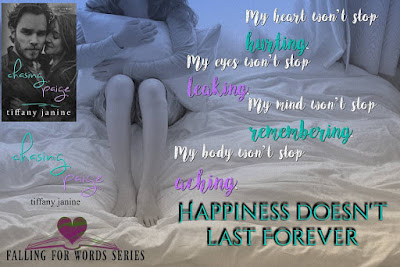