Review: Schism: The Battle for Darracia (The Darracia Saga #1) by Michael Phillip Cash 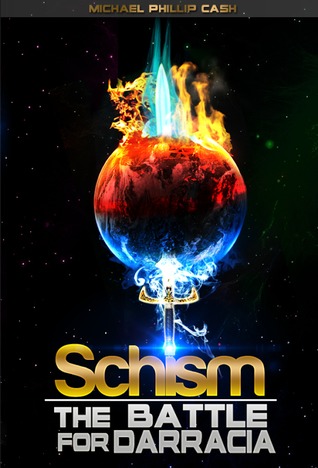 On the planet Darracia, an ever-widening social gap between its inhabitants is causing turmoil that is fracturing a once peaceful world. Struggling with his identity, nineteen year old Prince V'sair must harness the power of the elusive Fireblade, the secret to a warrior's heart, in order to overcome his uncle Staf Nuen's lust for supremacy. Will the energy of the Elements guide the young prince to his true destiny or will Staf Nuen conquer Darracia? After the success of his first three books (Brood X, Stillwell, and The Hanging Tree) Michael is fulfilling a dream and creating his own epic fantasy world. Schism: The Battle for Darracia is the first book in a planned series.

Michael Phillip Cash's series The Battle for Darracia is a wonderful work of science fiction.  It takes you to a new and exciting world of aliens with problems that are much like our own.  In his first book of the series, Schism, we are introduced to the full cast of the people of Darracia.  Although the characters are otherworldly, they are very relatable and one can understand the plight of all the different people involved in the story.

There are many characters that all have a part in the story.  Drakko, the King of Darracia and Reminda(an implant from Planta), his Queen.  Their son and heir to the throne, V'Sair and his love, the Quyroo, Tulani.  Zayden, the bastard son of Drakko, and fierce warrior.  Staf Nuen, Drakko's brother who is hungry for power and the throne.  Bobbien, Tulani's Grandeam, who is the high priestess of the Quyroos.  There are three species that live on Darracia:  Darracians, the sky dwellers, Quyroos, land Dwellers and the Welks, from the sea.  The Elements are their deities and want harmony in the land.

In the book, the dialogues intersect and mingle through all of the characters, each telling their story in a way that meshes together to create a beautiful story of coming of age, fighting for unity and love.  In this first book we are introduced to the world of Darracia.  This world is in turmoil, the mighty Darracians are on the top of the hierarchy.  The Quyroos are slaves in the world.

The King, Drakko wants to bring about change to the land and unite all races.  However, there are many who don't share his views.  The plot thickens when things turn for the worst for the ruling family, and the world is turned into chaos.

I was totally ensnared by this book.  It was magically created with many twists and turns that kept me engaged.  When I was finished, I was wanting to know what would happen next!  The Elements have spoken, Michael.  Great job!

Would I recommend this book:  Yes!  This is a wonderful work of urban scifi fantasy that takes you on a magnificent journey into truth, justice and unity of a world.  This is a great book that will leave you wanting to know what will happen next.

Would I read other books by this author: Yes.  I am inclined to say that I have never read anything by Michael Phillip Cash.  But I will read his works from now on.  He has a way about his writing that will intrigue and capture an audience.

***Received an ARC of this book from the Author in exchange for an honest review***
Posted by Anonymous at 8:00:00 AM