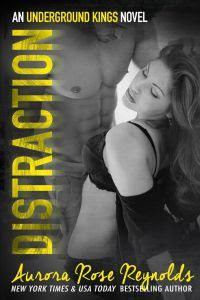 Distraction: The great intensity, novelty, or attractiveness of something other than the object of attention.

Sven is a man who takes pride in his ability to separate himself from his emotions. He's a man who knows who he is and where he’s going in life, a man who needs no one, because needing someone, anyone, is a weakness.

His past taught him love isn’t enough.

Maggie wants the happily ever after, but has never picked the right men, or stuck around long enough, to build a forever. It’s always been easier to get out early, before emotions make things messy.

When Maggie wakes up naked in Sven’s bed, with no memory of the night before, these two must be honest about their feelings and face their fears, so they can build a future together.

Will love be enough for them to get their happy ending together, or will a threat from outside strike them down before they ever have a chance?

OMG!  Whenever I see Aurora Rose Reynolds name on a book, I grab it and start reading as fast as I can.  As usual she did not disappoint me with her newest book, Distraction.  To say I loved the book is a misnomer, it was phenomenal, outstanding, fantastic, unbelievable!  Not only do we find out more about Sven and meet Maggie, but we also get to revisit some of our favorite characters from previous books in the Underground Kings series. All the previous alpha males and their other halves are present with glimpses into their lives and closure to problems that involve them.
When Maggie came walking into his night club, Sven knew his days were numbered!  He could deny it, but she was his.  He has always been able to separate his emotional self from those around him and right now he needs to keep his head clear and in the game, or he could end up dead.  But the more involved he becomes with Maggie the more he refuses to let her go, she is his forever!  All he has to do is keep her safe, stick to the plan and take care of business.
Maggie is a good girl that just has bad taste in men!  So when she went looking for the guy that drugged her sister while she was out clubbing, Maggie never dreamed that she would meet a man like Sven.  When he becomes her protector and boss, things take on another level of intensity!  Is this the one she has been waiting for?
There are so many twist, turns and lots of kink that the reader becomes throughly enmeshed within the story.  Each character is created for a specific roll in the flow of the plot and are fashioned to enhance the drama and mystery.  The scenes sizzle with heat and sexual innuendoes.  I cannot wait to read what comes next!  Fantastic addition to my Aurora Rose Reynolds library!