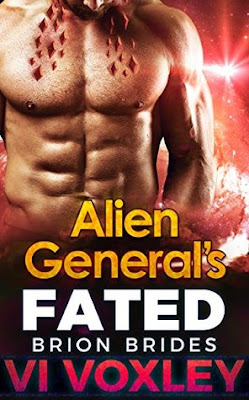 This general will never lose...

This is a full 100 k sci-fi romance novel, featuring a growly Alien Alpha general and a feisty, curvy human woman going against all the odds. It is part of a series but can and should be read as a standalone novel! No cheating and a guaranteed HEA!


NB! The file has been correctly updated and any readers with updates turned on can now view the right book file!

Aria Harris has been fighting for recognition all her life. A curvy, confident Earth woman, she's made it to the upper echelons of her profession, working as an Ambassador for the Galactic Union itself! Well, Ambassador... on a trial period, anyway. Having to prove herself is nothing new for Aria and when she's tasked to keep a Brion general on a leash during his trip to the seat of the union, it seems like another challenge to face. But she couldn't have been prepared for the general... Not only may she have met her match, but the man might very well be the most compelling, infuriating, sexy and despicable being she's ever laid her eyes on. Shame she can't look away, then. And that she has to make sure he won't blow up the entire seat of the Union before the day's through!

Ryden won his spot through sweat and blood and as far as he's concerned, that's the only way to live. Existing in a brutal reality of combat and conquest, the newest Brion general to join the ranks has no time or patience for weak politicians, petty tasks or wasting his time. Being sent to babysit the Galactic Union from a force they're clearly not equipped to deal with feels like all three at the same time. Despite looming threat and ever-lingering death, Ryden can't help but keep noticing the feisty woman who seems to fight him on every step. So is it so wrong to want to conquer her too, then, even if fate seems to not be co-operating at all?

Not only is Ryden in jeopardy of losing the Union to a for far more treacherous than anticipated, but he might be losing his heart to the fiery-eyed little Terran too. What's a man to do but make sure then that he's the last man standing, and that Aria would be right there by his side. The fact that the universe doesn't seem to quite agree with his plan is of little consequence. No one can stop this general, no one but her...

Will Aria learn to trust anyone but herself, and will Ryden come to know that there's more to existing than conquest? You know you want to find out!

Overall Rating:  4.25 Rockin’ ★★★★
A new general to the Brion Fleet and a new ambassador to the Galactic Union ignite the pages in Vi Voxley’s science fiction romance novel, Alien General’s Fated.  The Brion Brides series has become one of my automatic purchases.  The story is filled with action, romance, and unforeseen twists allowing the reader to escape from reality into a faraway galaxy created by this amazing author.  Aria and Ryden’s story is one of desire, fate and believing in each other even with war raging amongst them.

Aria was appointed as Terra’s new ambassador to the union and a year later she is still struggling to find her place.  Being held back by her colleague and apparent leader, she fights to see the good in every living being.  When she is given the daunting responsibility to be the liaison between herself and the Brion general, she accepts knowing this is her chance to finally be accepted into the political realm of the union by her peers.

Ryden fought his way to become the next general of the mighty warship Conqueror.  He took what was his right and didn’t look back as he became one of fifteen generals in the Brion Fleet.  His first deployment as a general is to secure Ilotra, a moon that is the center of the Galactic Union and extremely important to everyone.

When the two main characters meet there is an instant chemistry between them, but as we know Brions mate for life and Ryden doesn’t recognize Aria as his gesha.  At this point I’m thinking why not! They are perfect together, but you have to continue reading to find the missing puzzle pieces of this unseen outcome the author has magically woven.  I really enjoyed every bit of the story.  It’s a fantastic addition to the series and my library!