Review: Below the Belt (Worth the Fight #3) by Sidney Halston 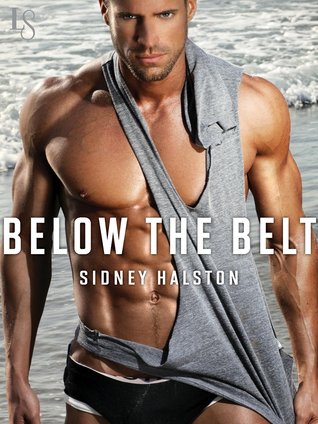 In Sidney Halston’s latest sizzling MMA romance, a former title contender turns the tables on his knockout trainer with a lesson in seduction.

Once one of the most sought-after names on the mixed martial arts circuit, Antonio “Scarface” Marino watched his career go down for the count as he chased skirts and made tabloid headlines. Now he’s finally making a comeback, and it’s all thanks to Francesca Silva, a Brazilian bombshell as tough as any of her fighters. But who’s the real Francesca: the trash-talking trainer who rides him hard, or the vulnerable woman who blushes at his touch?

Francesca went to the mat to sign Tony because she believes he still has the potential to bring big success to her gym—if she can keep his head in the cage and out of her personal life. After a short-lived marriage soured her on love, a one-night stand is all she can handle. Now Tony’s kisses are stirring up complicated feelings—especially when he agrees to face her ex in the ring. Francesca’s used to freezing guys out. But Tony’s tempting her to give in to the heat.


Overall Rating:  4.5 Rockin’ ★★★★☆
I’m a lover not a fighter but every fighter has one fight that makes or breaks him…and I’ll fight for the one I love! ‘Scarface’…Life is difficult when you forget what is most important to you.  Antonio Marino has let the fame and fortune of being one of the most touted mixed martial arts fighter, go to his head.  He has become a man so caught up in the pursuit of pleasure and notoriety that his first love, being an MMA fighter is almost lost! Enters a woman that shakes his world and dares him to once again become the fighter he once was, Francesca Silva.  She is part owner in a gym and training facility for fighters.  Tony signs with her gym and the sparks begin to fly! Will Francesca be the answer to him regaining who he really is?  Who is the woman that hides behind the mask that the world sees?

Strong women wear their pain like they do stilettoes…No matter how much it hurts! ‘Francesca’…Francesca knows that Tony has the potential to become a great fighter and a strong contender in the MMA world.  She signed him to help elevate her gym and pull in other top fighters.  The only problem with Tony is his refusal to stay focused on his training and to stop his wild ways outside the gym. The attraction that sizzles between Tony and herself must not be allowed to take hold.  She learned her lesson about love and refuses to allow anyone inside her heart; she cannot deal with anything else but sex without commitment! Will she be able to deny herself and Tony?

You have to fight through some bad days…to earn the best days of your life! ‘Francesca’ & ‘Tony’…This is the third book in the Worth the Fight Series by Sidney Halston and it is a fun, sensual read that will keep you turning the pages.  Characters from previous books are intertwined and their lives are expanded within the storyline.  Francesca and Tony’s journey to their HEA is a story you will not want to miss! Life is all about choices and the result of the path taken. Ms. Halston’s book is a KNOCK OUT that will take the reader down for the count!

Would I recommend this book: Yes! You have a hot Brazilian alpha female and a sexy MMA fighter that heat up the page with their sizzling interaction and scolding dialogue!

Would I recommend this author: Yes! I have read all of this author’s books and after each book, I cannot wait to read another!

***Received an ARC of this book from the Author in exchange for an honest review***
Posted by Anonymous at 6:55:00 AM