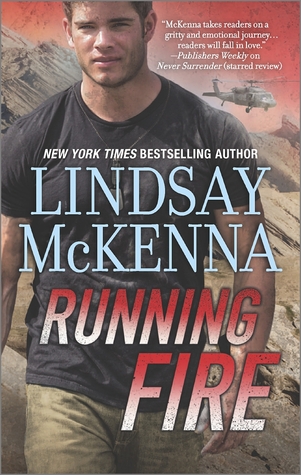 He was a haven in the midst of Hell…

Temporarily assigned to the Shadow Squadron in a troubled region of Afghanistan, Chief Warrant Officer and pilot Leah Mackenzie is no stranger to conflict—even if most of her physical and emotional scars are courtesy of her vicious ex. Still, she's got a bad feeling about picking up a team of stranded SEALs. A feeling that's all too justified once enemy fire hits their helicopter and all hell breaks loose…

SEAL Kell Ballard's goal was to get the injured pilot out of harm's way and find shelter deep in the labyrinth of caves. It's a place of dark intimacy, where Leah finds unexpected safety in a man's arms. Where prohibited attraction burns brightly. And where they'll hide until the time comes to face the enemy outside…and the enemy within their ranks.

Overall Rating:  4 Rockin’ ★★★★
In this the eighth book in the Shadow Warriors series, author Lindsay McKenna once again touches the pulse of what makes a true American Hero!  Running Fire tells the story of those brave men and women that are shadows infiltrating behind enemy lines to serve and protect freedom’s dream.  Kell and Leah are two of the amazing characters created to tell a story of not heroic deeds but also even true love can be found and nourished even in the heat of battle.

Life is not easy for a SEAL, especially one that is sent into the Afghanistan desert as a shadow. A shadow with an agenda to take out a Person Of Interest, a new leader on the edge of becoming a new thorn in the side of the offensive against the war on terrorism. Kell Ballard is that shadow, a SEAL and a sniper.  He had been hunkered down, watching and waiting for his assignment to appear so that he could complete his mission.  Everything changes for Kell when a Shadow helicopter that was sent in to pick up a group of SEALS was fired on and is shot down.  Going into warrior mode, he immediately goes to the aid of the pilot he sees crawling out of the burning pile of debris.  When he finds out that the Shadow pilot he rescued is a woman, things really heat up!

Finally Leah Mackenzie has escaped and divorced her abusive husband.  She is flying again and serving as a Shadow Squadron pilot in the Afghanistan region. As a Chief Warrant Officer she has the honor of into areas where few dare to go!  The assignment that her team finds themselves on is to give a pick up to a stranded SEAL team.  Leah is not prepared for the devastation and havoc that her team encounters at the pickup site.  Everyone is dead but her and she is fast losing consciousness, when out of the night steps a man with a purpose. He will not only save her from the Taliban, but also from the nightmare that continues to haunt her.  Sometimes the enemy can be someone you trust or maybe even love!

Would I recommend this book: Yes! If you bleed red, white and blue; love stories about true heroes and enjoy reading about hot sexy alpha males that know how to get down and dirty, then this is the book for you!

Would I recommend this author: Yes! I am in awe of this wonderful author that paints pictures with her words that grab the imagination and carries her readers into other worlds.  Ms. McKenna’s characters are so real that by the end of her books the reader feels like they know them.  The intense feelings that they exhibit, call to the heart and soul in only the way a great writer can create. I cannot wait to read her next book!