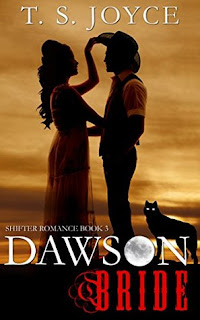 Werewolves meet the Wild West in this thrilling final installment of the Wolf Brides trilogy.

Lucianna Whitlock has her entire life planned out for her by men determined to use her as a pawn in high society marriage games. But when she balks against the cruel man who has won her hand, he rips her life apart.

A strapping cowboy, half-feral and fully terrifying, saves her life from her ex-fiancé’s vengeance. When her only hope is to escape to America beside the stranger with the inhuman eyes and that thick, southern drawl, she’ll have to decide whether escaping her old life is worth leaving everything she knows behind.

Gable Dawson has been running as a wolf for over a year, but saving Lucianna is breathing new life into the human form he left behind. To keep her safe, he’ll brave the rough waters of the Atlantic on a merchant ship, and travel back to the home in Colorado Springs he’s been avoiding for years. He’ll need the help of his pack to keep his woman safe. If anyone is worth facing his sordid past for, it’s Lucianna.

And if he can claim his mate and protect her from the reach of the brutal man who’s hunting her, he just might save himself along the way.

What do you get when you mix a 'Wild West Werewolf' with a 'Prim and proper High Society Miss'?  A story that only T. S. Joyce could imagine, then create and share in an amazing novel! Dawson Bride is the final book in Ms. Joyce's, Wolf Brides series.  The dialogue and characters fit perfectly within the time period it is set in.  It is the tall tale of two very unlikely characters, that find they are the answer for all of each other's problems!  They were both broken and scared but the bond that formed between them was unbreakable and healing.

So much death!  The inhumanity of man against man and the brutality of war.  Gable Dawson survived the American Civil War, but he was no longer the man/wolf that he had been before.  He could not return to his family a broken man and so he traveled.  He ended up in the English countryside.  Gable spent more time as a wolf than as a man, he was slowly losing his human self.  One night while wondering through the woods, he heard gunshots and screams of terror.  He was able to rescue a wounded angel, but not her family.  From that moment on she was his to protect, his woman.  But an evil man is stalking her and will do anything to get her back.  Gabe realizes he must get her back to his home in America, back to his pack.

Lucianna Whitlock was considered one of the great beauties of her time and much sought after by many suitors.  Even though she was beyond the acceptable age for a young women to marry, but that didn't matter now, a monster had found her and now she was promised to him.  Her father needed an alliance and she was part of the agreement.  Little did they know that her promised fiancé was a psychotic monster that enjoyed killing.  When she is saved by a beautiful scared man, she feels safe again for the first time.  Gabe stakes his claim and Lucianna claims him right back.  All they have to do now is make to Gabe's home in America and not get captured.

In this the final book in the trilogy, Ms. Joyce shows her brilliance as an author as she ties together the lives of the three Dawson brothers.  This is a trilogy that you will not want to miss and I highly recommend that you read them in order, but they can be read as a stand-alone.  Thank you T. S. Joyce for this enthralling series.