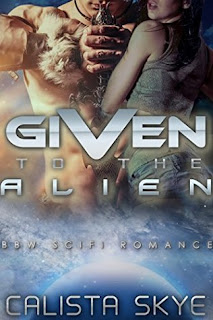 Olivia Cooper chose a bad time to become a space marine in the newly formed Space Force: Just when Earth had been badly defeated in mankind's first battle with the beautiful, but extremely deadly Ethereal aliens.

The straight-laced space marine sergeant is in the first line of defense, but still Earth desperately needs help in the looming war against the aggressive aliens. And help seems to be at hand when the alien General Ator'aq and his Braxians offer to fight for Earth. But even if Ator'aq is sensationally handsome and confident to the point of cockiness, he and his men also seem like primitive barbarian warriors. Can the Braxians really win against the sophisticated Ethereals?

And Ator'aq won't fight for free. His price: An Earth female who can be the mother to his heirs. Spirited and curvy Olivia fits his tastes perfectly...

This is a complete, full-length romance novel with no cliffhangers and a happy-ever-after ending!

As I read Given to the Alien, a science fiction romance by Calista Skye, I was pleasantly surprised with the overall plot and intricately complex world she created for the reader.  We delved into a future world, where a space colony on the moon has been obliterated by the Ethereals.  There is also a space station orbiting earth as its first defense against intruders.  This is Olivia and Ator’aq’s out of this world journey to finding peace, happiness and of course, love!    Space Force Marine Olivia Cooper is sassy, resourceful and a soldier at heart.  She knows what her objective is and doesn’t fluctuate in her actions.  She is straight forward, honest and with a full-curvy body she knows men desire her.  What she doesn’t expect is the instant lure of alien General Ator’aq.  Her partner is being assaulted by a Braxian alien on her watch, so Olivia carefully calculates the steps needed to help and ends up catching the general’s eye.General Ator’aq and his Braxian soldiers arrive in time to help defend Earth from the Ethereals but there is doubt from Earth’s government that the primitive weapons he uses will help them win.  When he meets Olivia he is intrigued by her ingenuity and wants to know more about her.  I recommend that you become ensnared in the sci-fi world Ms. Skye’s imagination has created.  You will not want to stop reading her story until finish every word.