Always On My Mind (The Sullivans #8) by Bella Andre 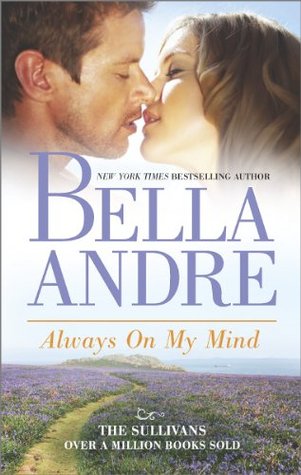 Can you find forever …a second time?


After a tragic loss three years ago, Grayson Tyler leaves his life in New York City behind and starts over in the rolling hills of the California coast. He's convinced himself that all he'll ever need again is the blue sky, a thousand acres of pasture and the crashing waves of the ocean.

That is, until the day Lori Sullivan barges into his life and promptly blows his emotionless and solitary world to shreds. Her passion and fire drive him crazy, as only a woman nicknamed Naughty can. But will Lori be able to convince him that it's safe to love her…and that forever isn't actually out of reach?

Lori Sullivan wasn’t looking for trouble.  She swore she wasn’t. Just because her nickname was Naughty and trouble seemed to follow her wherever she went, didn’t mean she wanted any today. On the contrary-for the first time ever, she was looking for some peace and quiet.

Lori was devastated by the betrayal of her ex and how he had used her to further his own career in the dance choreography.  So storming out of practice and loading a plane home is her first reaction to the since of lost that she is feeling. When her plane lands, she rents a car and starts driving with a suggestion from the rental desk she heads out to explore a little farm town called Pescadero. What does a big city girl know about farming? So why does Lori decide to apply for the position of farm hand?

In the middle of the board was a piece of white paper with the words Farmhand Needed in a strong, clearly masculine hand.  Not for one second of her life had she ever thought about living or working on a farm.  For her entire life, she’d known exactly what she was and what she would be: a dancer.

Grayson had left behind his life in New York three years ago and had slowly been bringing the farm back to life.  Now there is a car flying down his drive nearly running down his prize chickens!  And to top it all the woman crashes into his brand new fence.  Not just any woman the most beautiful woman he had ever seen and she wants a job as his farm hand!  Not on his watch, he left all that craziness behind when his wife was killed in a car accident. Lori is determined that he will give her the job and she will not take no for an answer.

“If you make it all the way through the list of farmhouse chores,” he said as easily as he could despite the twisting in his gut at the thought of Lori in another man’s be, naked and breathless as she ame for him, “you can have the job on probation.”

Lori and Grayson are both attracted to each other, but once burned is twice warned and neither are willing to forget the past.  Lori puts her all in to proving that she can do the job even if she has to work her fingers to the bone.  This is temporary until she is ready to face what has happened to her and get it straightened out. Grayson is beginning to believe that maybe Lori was sent to help him forget the past and move forward with his life.

“Last night, when you took me to that barn dance and pushed me out onto the dance floor, you gave me back my heart, Grayson.”  Her mouth was barely a breath from his as she whispered, “And I can’t see how a man could do something that good could possible be bad.”

Would I recommend this book: Yes!

Would I read other books by this author: Yes! This is one of my favorite authors.  I cannot wait to see which Sullivan will be next to fall.