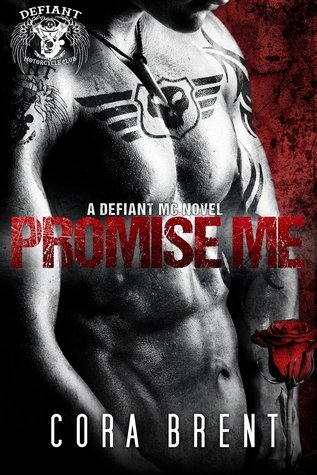 Promise Talbot needs to escape.
Forced into a polygamous marriage to a sadistic man, she grabs a desperate opportunity to flee his clutches.
And falls into the world of the Defiant Motorcycle Club.
Grayson Mercado seethes with the injustice of a long imprisonment for a crime he did not commit. Finally free, he is trying to make a life among his new Defiant brothers. Everything changes when a battered young woman approaches him, begging for help.
Promise and Grayson couldn’t be more different.
But the collision of passion and danger will spark a love written in their fates.

This epic romance spans a reclusive cult community in northern Arizona to the stark landscape of the Mojave desert.
*Full length novel contains adult language, mature emotional themes, and explicit content. Not intended for those under the age of 18.*

This is the next book in the Defiant Motorcycle Club by Cora Brent.  It is a story that will move you, horrify you and at the same time have you say there are still good people in this world that care for others. While this is a story about an abusive religious cult and a MC, it is more about a remarkable love story that shows all things are possible when love is involved.

Our story begins with Promise Talbot a member of sadistic cult that claims to be religious!  The women are given to the men in forced polygamous marriages that they have no say in.  They are treated like owned like livestock and used to breed.  She has been promised to an older man that already has wives.  The only reason she has not escaped is the need to protect her younger sister from being given in marriage to one of these men.   Promise did not know what to expect, but it wasn’t the rape and beating that almost killed her on her wedding night.  She had to escape from this evil man before it was too late.   When the opportunity came, Promise begged for help from a man that was part of a MC.  He had the kindest eyes and she knew that he would keep her safe.
Grayson Mercado at one time had a future.  He had everything planned, college and a life doing what he loved.  Grayson was pulled into a situation that put an end to that future and he found himself serving time in jail for a crime he didn’t commit.  While serving time Grayson meet Cas a member of the Defiant MC and they became friends.  He became a member of the Defiant Motorcycle Club after he was released and found his place there.  When Gray saw the beautiful woman in the restaurant and she begged him to help her, he knew he would do anything to help her.  Will Gray and Promise find healing within each other’s arms?  Can Gray protect Promise from her past?  Read this book and you will not be disappoint with the story that unfolds on each page.

Hero: Grayson Mercado 4.5 stars
Heroine: Promise Talbot 4.5 stars
Plot:  4.5 stars
Steam Level:  4.5 stars
Cliffhanger:  Yes
Would I recommend this book: Yes!  This book hits some many hot spots for a reader including a really hot alpha male and lots of sizzling sex.  It involves an MC that helps an abused woman find sanctuary and freedom from her abusers. The love that grows between the two main characters is both beautiful and healing.

Would I recommend this author: Yes! Ms. Brent has created a series that touches the heart and soul of her readers.  This is an amazing author that has created not only characters that live on the pages but a plot that moves you!