Review of Choose Me (The Archer Brothers #2) by Heidi McLaughlin 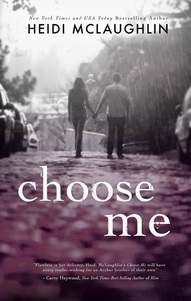 Evan and Nate Archer: Brothers, best friends, warriors and now enemies. Both in love with the same woman. Both determined to fight for what they want.

Nate Archer promised to protect Ryley Clarke in the event Evan didn’t make it back. It’s a promise between brothers since the early days of basic training. Nate never considered that his feelings, long buried since high school, would resurface and grow stronger.

Evan Archer wants answers. He wants someone to pay. After being gone for an unprecedented amount of time, nothing is making sense now that he’s home. Most of all, he can't understand how his brother ended up engaged to his fiancée. Evan is determined to uncover the mystery, and win back his family.

The Archers are about to fight dirty.

Would you fight with everything you have to get your family back?  Just when things can't get any worse...it does.  In Choose Me, The Archer Brothers Book 2, worlds are turned upside down and inside out.  In this the second book, the tragedy of loss, pain and second chances continues.  However, things begin to make a little more sense for the characters and in the end the darkness begins to diminish, giving the family the added light of hope.

The Archer brothers are at war, with each other.  Evan is thwarted by the fact that his twin brother took his girl.  Although, a love like the one Ryley and Evan share is hard to extinguish, let alone compete with.  However, not even the caring ways, love and devotion that Nate has shown Ryley since Evan went missing can measure up to the all-consuming love that Ryley and Evan share.  With the added bonus of his son, there will be a fight like no other.  This is a fight for family, a fight for justice and the wrongs that took Evan away in the first place. It will be a fight to protect and regain his family.  Will Evan get his girl back and have the family he has always dreamed of?  Will Ryley choose Evan because her heart is telling her yes or will she choose Nate because that's what makes sense?

This book was beautifully constructed with intricate details of the characters and plot that the author put into place from the very beginning.  I was hooked on the story after reading the first book and this one left me with a feeling of completion and closure. I fell even further in love with this series by the end.  If you are looking for a story that will tear at your heart while uplifting you as well, then this is the book for you.  Although I would recommend reading the first book Here With Me, before reading this book. Excellent, original literary piece of work, Heidi!