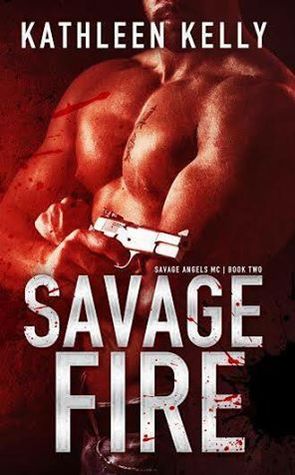 Emily Reynolds, estranged sister to Dane Reynolds, President of the Savage Angels MC, has just lost her father. He was not a caring man and inflicted suffering on his family. Dane abandoned her and her mother years ago, leaving them alone to deal with a brutal man who never showed any love or mercy. Emily wants Dane to feel the pain she felt, she wants him to suffer as she did and decides to make the long drive to see him.

Salvatore Agostino, captain in the Abruzzi crime family is also on his way to see Dane Reynolds. A ruthless businessman, he is fiercely loyal to his family and his men. A chance encounter brings him face to face with Emily.

These two meet and their attraction grows into a love that neither could have anticipated.

Will they be able to overcome the turmoil that awaits them or will their love be destroyed by forces beyond their control?

What happens when the President of the largest MC in the country comes up against one of the most powerful crime families in the country? Read Kathleen Kelly’s second book in the Savage Angels MC and find out! This is the unlikely love story of Emily Reynolds and Salvatore Agostino and not one you will want to miss!

Salvatore Agostino is Captain for the Abruzzi crime family and he has never been accused of being a nice man. His rise was fast and resented by some of the older members.  Sal had fought his way to the top and even though he was considered young for his position, he was loyal to his family.  So when he was told to do something by the head of the family, he did not hesitate. On the way to take care of business, he rescues an innocent young woman, not once but twice.  This woman touches Sal’s heart in a way that no one ever has before.  She needs a keeper, someone to protect her.  He maybe a member of a crime family, but he does not harm women!

Emily has lived her entire life in an abusive home where her father abused and beat her mother.  Her only protection had been her brother Dane and when their father kicked him out she was left alone. Now years later, Emily decides it is time to find Dane and let him know how she feels.  Taking off from the hospital, where she had nursed their father until the end, she doesn’t think about what she is doing.  On the way she is accosted at a rest room and is rescued by another man.  Then she runs off the road and hits a tree!  Once again the same man that saved her saves her again. Is this a coincidence? The feelings that her rescuer evokes are like none she has ever experienced before.

When Emily and Sal find out more about each other, is there a chance for them?   Will their backgrounds destroy them or will they come out on the other side together?  Kathleen Kelly has done it again with this intricately woven tale of love going against all odds and winning!