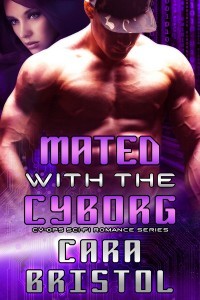 Kai Andros’s orders were simple. Get in. Gather the intel on the terrorist organization. Get out. Then he met her. Mariska. Beautiful. Innocent. Ignorant of her father’s atrocities. And marked for death. His orders said nothing about saving her. But he did. He went off-mission.
Can a rogue cyborg outrun both Cyber Operations and the terrorists to save the woman he loves?

In Mated with the Cyborg the second book in Cara Bristol’s Cy-Ops series, we are thrust into the ongoing battle between the Alliance and Lamis-Odg terrorists.  This story captivates your attention from the beginning providing a solid connection with the plight of the heroine.  This is Kia and Mariska’s journey to their happily ever after.

Mariska is the daughter of General Obido commander of the space station she has lived on most of her life.  For the majority of her life she has been shunned by her people who believe she carries the sacred spiral mark of the Great One.  Being told that her looks are repulsive to others, she has always covered her face and silently suffered alone.   When her new android R981 is assigned to her protection by her father, she knows not to trust, not to let down her guard.

Kia is on a mission for Cyber Operations.  He is infiltrating the space station looking for a weakness in their force.  When he is assigned to Mariska he tries to learn more through her only to realize her situation isn’t favorable.  When her father decides to send her for a mating that will surely end her life, he makes his choice to intervene.  Even against orders from his superiors.

This science fiction romance is thought-provoking and entertaining.  I enjoyed the humor and seriousness the author intertwined throughout the story.  With Mariska living a sheltered life and Kia serving as a cyborg soldier, the sparks between them developed a strong bond.  Brock and Carter from the previous book are important secondary characters and I’m hoping Dale, (a former Cy-Ops) gets his story!