Luke Roberts was your typical wild and crazy guy, intimately getting to know each of the girls at his local bar and quite often starting fights over them. Going home with a different one each night of the week until he started spending too much time with his best friend’s girl.

After getting his head on straight in the Army, he met the lovely Cailyn. Cailyn Donnolly was a pure and innocent virgin. After nearly dousing him with pepper spray when he helped her with a flat tire, his kind actions and charm eventually won her heart. Holding onto her virginity until her marriage was sealed with a kiss, Luke isn’t sure how he wants to claim her. The animal inside of him wanted to ravish her, while the loving and caring husband wanted to be gentle and not overwhelm her.


Walking the fine line boring mundane sex and hot passionate kinkery, Luke and Cailyn are fighting internal battles to discover a way to let the other know they are wanting more.


Will they spice things up just enough? Or will it get too hot for one of them to handle? 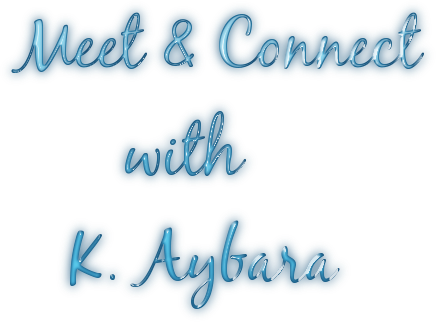 K. Aybara resides in Louisville, KY with an amazing wife and two sons. When not being pulled in every direction possible with the normal tasks of life, he enjoys working in the woodshop as well as breeding and raising tropical fish. He didn’t find his love for reading until meeting his wife, however now it is rare to find him without a book in hand. While he had no intention to start writing until a friend challenged him to do so, he quickly found that he was hooked and couldn’t wait to get his first book done and start on the second.

Admitting that there is a time an e-reader comes in handy, he still prefers to hold the real thing when reading. While in the past he only read fantasy and dystopian for the most part, after getting to know several indie authors at a local signing he attended with his wife, he is now open to giving all genres a shot.

Image by Cool Text: Logo and Button Generator - Create Your Own Logo