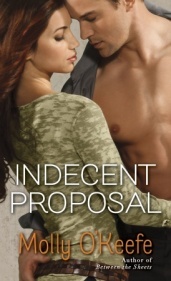 With his chiseled jaw and his thick blond hair, Harrison Montgomery was born to lead. Four generations of Montgomery men have served the state of Georgia and now he’s next in line. Harrison, though, is driven to right wrongs: namely to clean up the political mess left by his father’s greed and corruption. But Harrison must first win his congressional bid, and nothing can get in his way—not even an angel who served him whiskey and gave him a shoulder to lean on and a body to love for a night. Problem is, she’s pregnant. Scandal is brewing and there is only one solution: marriage.

Damage control? Ryan Kaminski can’t believe that a cold, calculating political animal now inhabits the body of the emotionally vulnerable stranger who’d given her the most unforgettable night of her life. Really, she doesn’t want anything from Harrison, except to be left alone to have her baby in peace. But Ryan is broke, jobless, and essentially blackmailed by Harrison’s desperate family to accept this crazy marriage deal. For two years, she will have to act the role of caring, supportive wife. But what is Ryan supposed to do when she realizes that, deep in her heart, she’s falling in love.

Wow!  Once again Molly O'Keefe has rocked my world with her newest book in the Boys of Bishop series #4, Indecent Proposal.  The characters are rock solid in their development and absolutely perfect, as well as the wonderful storyline that Molly has created.

Harrison's story has been one of mystery since the beginning of the Boys of Bishop series.  He loves his sister, no doubt, but he seems to be rather lonely in his own skin.  I was immediately excited that we would finally get to hear his story.  Harrison Montgomery is a sophisticated politician from a wealthy family of Georgia politicians.  He has always tried to separate himself from his father's misgivings, during his father’s governorship of Georgia. On his own career path in politics, Harrison's life is changed by a one night stand and from a woman that captures his heart.

Ryan Kaminski is at the end of her rope.  She is broke; missing her family and now finds herself in a very precarious situation after a one night stand with the handsome Harrison Montgomery.  Accepting an offer she simply cannot refuse, Ryan finds herself in a new life, surrounded by strange events and highly political people.  Yet, she longs for the one thing that she might not ever have...love.

Will Harrison trust in Ryan to give him what he needs most?  Can Ryan trust in Harrison enough to accept his proposition?  Read this book to find out.  You will not be disappointed!!

This book was such a beautiful mixture of love, belonging and turmoil.  I enjoyed the story from the beginning till the end and was still longing for more.  Molly O'Keefe has a way of spinning a tale that makes it almost impossible for a reader to wait for something else to happen.  I am anxiously anticipating whose story we will be enlightened with next!  Beautifully written, Molly.

Would I recommend this book: Yes!  Every day!!  I love the Boys of Bishop series.  These books will keep you longing for more!  Read this book!!!

Would I read other books by this author: Yes! I love Molly O'Keefe and everything she writes!  She is a gifted author who brings her characters to life through her expressive descriptive words.  Definitely one of my top favs, Molly!

***Received an ARC of this book from the Author in exchange for an honest review***
Posted by Anonymous at 5:30:00 AM