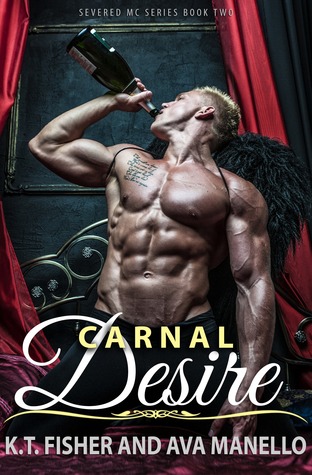 Eve returns home unaware danger is hot on her heels. Will Satan get the revenge he seeks, will Angel save the woman he loves or will Ink get the woman he deserves.

The nail biting conclusion to the story that crosses two continents...

Carnal Desire is book two in the Severed MC series written by author K.T. Fisher and Ava Manello.  This book continues where Severed Angel ended.  Eve leaves behind her heart in Australia when she returns home to England.  She fell in love with the Severed MC’s VP, Angel.  It was time to return to her daughter and the life she had there.  There was no other choice because she needs her child and Angel had not asked her to stay.  Even though it had been a horrible last few weeks, she would have stayed.  As she boards the plane headed home, Eve does not know that she is being stalked by Angel’s twin Satan.  Satan has sworn to kill her because she is a loose end that must be eliminated.  She was the only witness to his killing a man in cold blood.

Angel was recovering from a gunshot wound inflected by his twin when Eve left.  He did not have the chance to ask her to stay with him and be his Old Lady. His plan was to return to England with Eve, get her daughter, and then return to Australia with them as a family. Everything changes when Angel finds out that his brother is out of jail on a technicality and headed to England after Eve.  Angel follows Eve to England and prays that he is not too late and will be able to save her and her family from his evil brother.

While on the plan Eve makes a new friend, Elle.  She feels like they have always been friends and shares everything that has happened during her trip down under. Elle listens and tells Eve that if she needs her she will be there for her.  Eve is totally unaware that Satan is onboard the plane watching her and waiting for the perfect time to take her.  Satan’s one joy in life is causing chaos and pain to others.  He hates his brother and has killed those that Angel loves before.

It is a race between good and evil!  Who will win?  Will Satan get to Eve first or will Angel arrive in time?  During all the action going on between Angel and Eve another couple’s relationship begins to develop into a new storyline.  Threaded all through this book you will get glimpses of their beginnings and possibly their ending!  Read this book to find out.

Would I recommend this book: Yes.  This is the second book in this series and is a definite hold on to your seat kind of book!  You have so many different things happening all the way through the book until the last page.  It is filled with love, lust, sex and hard core violence that are not for the faint of heart.

Would I recommend this author: Yes.  The authors really understand how to grab their readers and not let go with their amazing books!  I look forward to reading their next release to find out what happens next.
***Received an ARC of this book from the Author in exchange for an honest review***
Posted by Anonymous at 6:00:00 AM