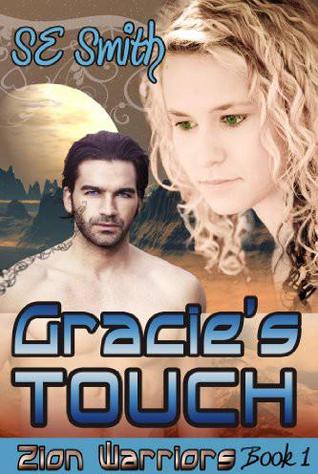 Gracie Jones was little more than a child when the Earth was invaded by an alien species. Escaping into the subway tunnels of New York City, she hid in fear of being captured. Discovered by four men who became her protectors, she fought alongside them and they became known as the Freedom Five. At seventeen, she made a decision that turned the tide on the war between Earth and the Alluthans but in exchange she gave up all that she knew.
Kordon Jefe is a Zion Warrior and commanding officer in charge of the Confederation of Planets military. When an unknown species begins attacking some of their outer settlements, he is assigned to discover who they are and stop them…at any cost.

Gracie unknowingly finds herself stranded millions of light years and hundreds of years in the future in a distant galaxy on an undeveloped moon. When an old enemy threatens once more, she does not hesitant to use her knowledge to try to stop them once again. Only this time, it is not just Earth she will be saving but the Confederation itself.

When their two worlds are thrown together, Kordon is unsure what to do with the strange, delicate creature that fights and behaves unlike anything he has ever encountered before. One thing he does know, he plans to keep her.

Overall Rating:  4.5 Rockin’ ★★★★☆
Gracie's Touch by S.E. Smith is one of my all-time favorite science fiction romance novels.  I actually stumbled across this author one day while searching for a great book to read to escape from my every day mundane world.  Ms. Smith’s unique writing style is only seen in her books and shares a perceptive that is new and fresh.  Her stories grab your attention from the beginning and won't let go of you even days after reading it.  She is the storyteller whisperer!

The Earth has been invaded by half-organic/half-robotic group of aliens known as the Alluthans.  Young Gracie’s world ceases to exist as she has known it and becomes a war zone.  She is separated from her family when they are captured by the aliens and incarcerated.  She is left alone on the streets until one day a group of resistant fighters finds her in a subway tunnel malnourished and scared.  She grows up as a member of the Freedom Fighters and becomes known as one of the Freedom Five, the leaders of the resistance.  When she devises a plan to deliver a virus to the mothership, Gracie’s world is changed forever.

Grand Admiral Kordan is a respected leader of the military and commands a starship for the Confederation of Planets. He is a warrior from a planet of warriors and a loner.  When he hears Gracie's voice, he is touched by the sound of it.  Once he is face to face with her he knows she is his true mate and she will forever be his.  Their road together is full of uncertainty and questions.  Will Gracie let go of her past and embrace her future?  I urge you to read the book and find out.


S.E. Smith takes the couple through so many complications and hurdles that you will find yourself sitting on the edge of your seat hoping they are allowed their HEA! The world she has created is full of explosive action in and out of the bedroom.  This sexy science fiction romance is a must read for all.
Posted by Anonymous at 7:00:00 AM