Review of Reckoning (Realms of Darkness #2) by R.S. Broadhead 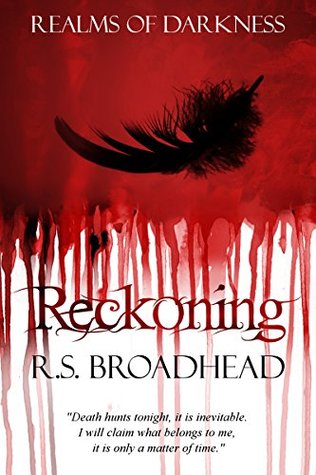 Reese Salt has had a strenuous past year. Being introduced into a world of monsters, training non stop, fighting against a growing force that terrifies her, and falling in love with her trainer has drained her. Things are not getting better. In fact, they seem to be out of control.

After discovering she isn’t entirely human, Reese is afraid to open up to those around her. She sees herself hunted and locked away in a cage. Someone close to her in the group is manipulated by Derek and abandons them to join forces with those they are fighting against. Once finding out that Derek has plans for Sim, Reese brings him to the training camp. This sets things on a downward spiral for her. Feeling lost, she leaves in search of answers.

She is a part of something much greater than she knows. All things keep leading her back to a truth that is just out of her reach. What will it take for her to openly learn what her role is against Derek?

Can Reese accept who she really is? A fight is coming for her, a fight she can’t escape.

In this the second book in R.S. Broadhead’s Realms of Darkness series, Reese Salt’s story continues.  It is a continuation where book one left off and expands on the struggle that our heroine has endured since learning of her special gifts. Reese has discovered that everything that goes bump in the night is really to be feared and that part of her is not human!  She is being trained to fight and yet, who and what is she?   Will she be hunted like those she is being trained by Steele to go after? Will Steele one day have to hunt Reese?  Only time and answers will tell!

Reese is a strong willed, alpha female that is conflicted with her role and what is expected from her.  Secrets are starting to unfold and keys to understanding the dreams that keep occupying her sleep are opening closed doors. Relationships are being tested, while enemies are identified. Life as she knew it will never be the same and she cannot help but think who can I trust?

If you enjoy reading paranormal romance with a touch of fantasy thrown in this is a great read for you.  This book really addresses the questions raised in the first book and unravels them beautifully for the reader. Reading book one is a must to set up for this fast paced thriller.  It moves at much faster speed than the previous book.  The plot is well developed with twists and unexpected kinks, while the characters roles are more decisively established.
***Received an ARC of this book from the Author in exchange for an honest review***