Review of The Wolf's Mate #1: Jason & Cadence by R.E. Butler 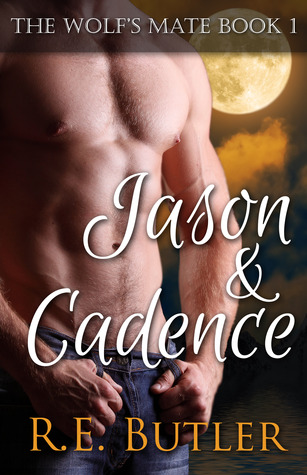 For 14 years, alpha wolf Jason has watched his partially marked mate Cadence live her life without him. Circumstances force his hand and he must find a way to get her to uncover her buried memories of their past before someone else steps up to take her from him.

For as long as she can remember, hybrid wolf Cadence has loved Jason with every fiber of her being,but he’s consistently shoved her away until the love that’s there is bound tightly in anger and shame. No one can take his place in her heart, but that doesn’t mean that there aren’t wolves willing to try.

Will Cadence be able to get through Jason’s icy demeanor to the heart of the boy she’s always loved? Can Jason undo the past so they will have a future together?

This book contains red-hot werewolf loving, plenty of neck biting, and misuse of a kitchen counter. The Wolf’s Mate is a book for mature audiences only and contains sexually explicit content.

Overall Rating:  4 Rockin’ ★★★★
R.E. Butler’s, The Wolf's Mate Book 1: Jason and Cadence’s story is an unexpected find. It has a surprising storyline that is full of adventures just waiting to happen.  Plunging the reader into the world of wolf shifters where our hero and heroine are woven together by a unique bond that is so strong it survives years of neglect and at points, almost hate.  Jason and Cadence's happily ever is a rough and rugged road with lots of hazards and pitfalls for our couple.Cadence is a hybrid shifter with a really sassy mouth.  Born to a full blood shifter and a human father, her birth resulted after her mother was attacked and killed by another shifter.  Rugged sexy Jason recognizes at an early age that Cadence is his mate and he must protect her from his beast.  Their friendship originated when they were young.  It later turns volatile when Jason has to learn to control his beast.  During this time their friendship and love becomes tarnished.  Cadence feels the ultimate betrayal when Jason turns his back on her, leaving her without her friend and mate.But there is so much more to their story and without giving away any of the particulars, let me state that this is an excellent beginning to the series R.E. Butler has created.  The characters are believable and almost seem human.  They own businesses and homes within the community and interact with humans as if they are accepted and not feared.  The secondary characters complimented the storyline and add flavor to the mix.  This book had drama, deceit, twist and turns and at one point I wasn't sure if Jason even had a chance with his mate! Fantastic addition to anyone's library!

Purchase Links:
Amazon  /  Barnes and Noble
Posted by Anonymous at 6:45:00 AM