Review of Be Here Now (Cedar Creek, #2) by Julia Goda 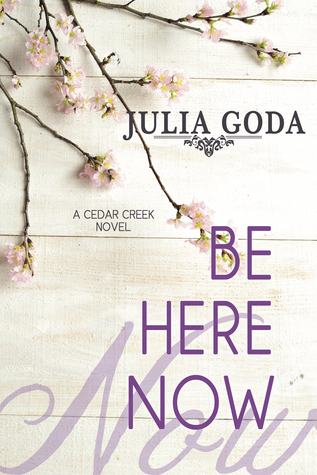 Six years ago Loreley Cooper thought she had it all. Head over heels in love with her boyfriend Jason and ready to take on the future after college, she landed the internship of her dreams. But things came crashing down during a fight, when she believed she found out he’d done something she knew she could never forgive. Completely heartbroken she walked away and hasn’t talked to him since.

Now, six years later, Loreley is recovering from a painful tragedy that almost killed her. Finally finding her way back to herself, now famous rock star Jason Sanders storms back into her life and seems determined to win her back. Why he would seek her out after all this time, Loreley has no idea. She has sworn to never talk to him again after what he did.

Jason Sanders is determined to not let the love of his life walk away from him again and is willing to do anything and everything to make her give them another chance.

Misunderstandings are uncovered and secrets are revealed that lead to pain and heartbreak yet again. Will they have what it takes to forgive each other and themselves and fight for their happily-ever-after or is it too late?

In Be Here Now, we find ourselves once again in the small community of Cedar Creek visiting with characters introduced in the first book in this series. Rocky Mountain high meets Rock Star is the story told in Julia Goda’s second book in her Cedar Creek series.  Ms. Goda shares the story of one, very special woman and the man that let her almost get away! This is Loreley and Jason’s story about their lost love and how they are able to find it again, with a few twist and unexpected turns along the way.

Loreley Cooper has loved only one man in her life, Jason Sanders.  When he destroyed her world with a few words, she leaves him and returns home.  Life for Loreley continues, but true love never dies.   It is just buried waiting to be uncovered.  So when Jason Sanders walks back in her life demanding that she talk with him, can she take a chance?  Is it possible to let the past go and find peace in forgiveness?

She is the one woman that he can never forget. No other could ever take her place in his heart or life.  After six years and hitting an all-time low, Jason knows it is time to face the woman he loves and claim her once again. He has questions for Loreley! Like, why did she leave him without saying goodbye?  Why didn’t she answer his calls, text?  Is it too late for them?  Jason is determined to win her back and will not take no for an answer.

Secrets have a way of destroying those that keep them!  Has Loreley’s secrets destroyed her chance of happiness with Jason?  Read this amazing love story to uncover all of the secrets that Jason and Loreley kept from one another.