Review of Lucky's Choice (The Last Riders #7) by Jamie Begley 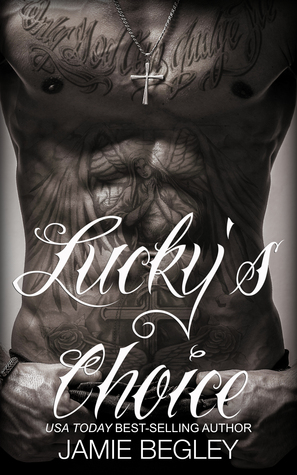 Lucky had always led a life of service. Always put his life on the line for someone else, managing to survive by pure luck and skill. After bringing an end to a multi-state drug ring, he was finally able to live the life he had wanted as a Last Rider…

A good man would walk away and not touch the curvy woman who had been tugging on his heartstrings. Lucky wasn’t a good man. Therefore, the bad-ass biker in him had a choice: once again become the man he had pretended to be and stake his claim, or take the devil’s highway.


Some girls had all the luck.

Willa wasn’t one of them. All she wanted to do was give a home to the children she had made orphans. Instead, she found herself needing help from the man who had left the pulpit behind to embrace a life of sin.

Painfully shy and withdrawn she wanted a quiet life, a simple man, and well-behaved children. The last thing she had ever expected was for Lucky to want her size twenty body and show her a passion that would lead her straight to hell.

Sometimes luck looks you in the face and says, screw you!  Lucky was dealt a hand that some would say there was no way out of, except in a pine box!  In Lucky’s Choice we pick up on the story, his story and find out who he really is. Jamie Begley once again has created an unforgettable story!  Lucky's Choice is everything and more which I expected from this author.  Her characters from previous books also impact the storyline.  From reading the previous novels in this series, I was already invested and loved every moment of it. This is Willa and Lucky’s story of how love will not be denied, regardless of the cost!

Lucky has always put others before himself, serving, giving and taking care of others.  Living the life that he has, there was no other choice. Raised as the son of a preacher; God and serving others came first, until he served as a Chaplin in the military.  The brutal facts of war and the deaths caused by it can test a man’s faith.  But now things have changed and the one thing he wants more than anything is Willa.  That beautiful, sexy creature that he knows God made special, just for him. There are things in his past that he cannot escape and may keep him from the one woman he wants to claim as his own.

Willa has always followed the good book, followed her heart and walked the line of goodness and caring for her fellow man as best she can.  However, three years ago when Pastor Dean walked into her church she started to question everything she was and wanted.  Oh she knew she would always follow God's word, but Pastor Dean challenged everything in her being.  She was attracted to the man, wanted him badly but she knew that he didn't feel the same way about her.  But when circumstances throw them together, is she brave enough to grab hold with both hands and not let go?

The way this story unfolds, is awe-inspiring.  It was amazing to me, to see how this tattooed preaching biker came back around to what really is important.  How Lucky finally realizes that God always has a plan even when we can't or won't see it.  I loved that Willa was so patient and loving.  I could relate to her character on a level that made me see how vulnerable we all are in which can ultimately lead us to places that we can't even imagine going.  I love this MC series by Jamie Begley and Lucky's Choice is nothing short of fabulous! This is a must read for those of us that love a happily ever after, but also a challenge getting there!