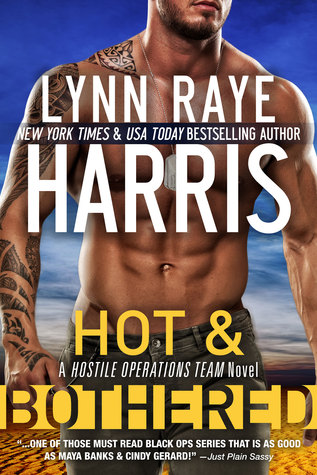 He can never have her. Having her means the end of his career in the Hostile Operations Team. But when he learns she’s carrying his child, he’ll have to make a choice…

Ryan “Flash” Gordon has been drawn to Emily Royal bin Yusuf since the first moment he met her. But she’s a terrorist’s widow, which means she’s completely off-limits. A HOT special operator can never be with a woman whose name is on government watch lists the world over.

But when Emily begs him for just one night, he can’t refuse. The next morning, she’s gone. Not just from his bed, but from his life.

Emily can never clear her name—or can she? When a rogue CIA operative offers her a chance to put her past behind her and do something for her country, she leaps at the opportunity—even though it means leaving behind the man she’s fallen in love with. But not before she lets herself have one night with him.

One night with stunning consequences…

Once again Lynn Raye Harris hits the target dead center with her latest book Hot & Bothered.  This is number eight in her HOT series and is filled with military ops, suspense, passion, denial and eventually a happily ever after for her main characters.  You will not want to miss, Emily and Ryan’s story of redemption and love found!
Mistakes made as a broken young woman lead her to bin Yusuf, the man she thought was her Prince Charming, but ended up being the devil in disguise.  Branded as a threat to her country, Emily Royal bin Yusuf realizes she will never have a normal life.  The only way she can redeem herself is to find a way to prove that she is not a terrorist and is a loyal US citizen.  So when she is approached with a deal from a Black Operative that will wipe her past clean, Emily doesn’t hesitate, she accepts.
Flash has been there for Emily since his team rescued her from a militant group and returned her to the US. He has told himself that she is untouchable and there can never be any relationship between them, only friendship.  When Emily disappears without a word, he is devastated and cannot believe that she would return to the area where she was rescued from! Return to help bring down another terrorist cell!  Ryan will do whatever he has to do to find her and keep her safe, even if she doesn’t want him too!
Hero: Ryan ‘Flash’ Gordon 4.25 stars
Heroine: Emily Royal bin Yusuf 4.25 stars
Steam: 4.25 stars
Plot: 4.25 stars
Cliffhanger: No