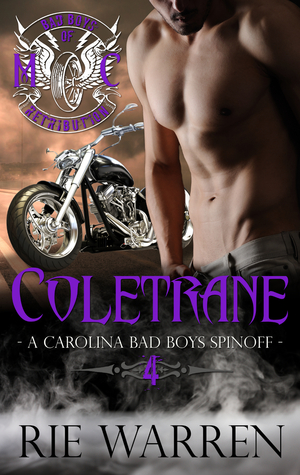 From the world of Carolina Bad Boys and Retribution MC, this bad boy biker likes to be in control, and he’s ready to take what he wants.

Coletrane:
Her name is Sinclair Chatham. Sin. That’s exactly what she is—walking, talking, in the flesh sin. She’s haughty, privileged, so goddamn starlet sexy, with an ass I want to grab and spank raw.

I want her to give herself over to me. I want her to lose that polished princess veneer. I want to strip away the money, the manicures, the maids, the immaculate façade.

I need her to be mine. But I’m a grunt. A biker. A tattoo artist. I’m blue collar all the way, and her family will probably shit bricks if they ever meet me.

Not to mention, I’m running from a bad past that’s about to catch up with me.

Sinclair:
I would never go for Cole in a million years. He’s gruff, rough around the edges—and covered in ink. He’s unapologetic, demanding, and sometimes scary as hell. He tells me what he wants, how he wants it, and why he’s going to ruin me for all other men.

Coletrane destroys my vanity, gets inside my head while he gets into my bed, and I can’t say no to him. He’s not what I expected—tender at times, taking no prisoners at others. He breaks me down, builds me up.

He is not my type.

They say opposites attract, and they’re right. I just didn’t expect him to turn my cushy life upside down and inside out. But it’s too late, and someone’s going to get hurt.

Coletrane is the conclusion of the Bad Boys of Retribution MC series by the incredible author, Rie Warren.  In this extraordinary story you find out what happens when two opposites meet and find out that they cannot stay away from each other!  Do opposites really attract?  This is the story of a privileged princess and a bad boy from the wrong side of the tracks.  It is Sin and Cole’s version of a happily ever after with a few zigzags alone the way!

Coletrane is one of the newest patched in members of the Retribution MC. He has secrets that none of his brothers know about, except maybe Hunter!  His life had been one of struggle and loss.   Losing his sister to a drug overdose and his mother’s breakdown at her death had left him alone. But it was also a wakeup call…get clean, or continue down the path of death and destruction he was on! Cole cleaned up his life, went to college and joined the Retribution MC. He is now doing what he loves, tattooing ink!  When Sinclair Chatham walks into the club, he feels as though he had been run over by a semi and life for him will never be the same!

Sinclair’s life is one of wealth and privilege, but also one of obligation.  She may be wealthy, but with that wealth, came responsibility to help those less fortunate. When she goes the Retribution MC’s club with a friend, she did not expect to meet anyone!  He was not like any man she had ever met or dated, but the moment their eyes met…game over! Coletrane was the man for her! Now all she has to do is convince him and her daddy.

Specters from Cole’s past rear their ugly head and threaten his future. Will Cole and Sin find a way to bring their two lives together?  Read to find out in this riveting book, you will not be disappointed in the outcome!