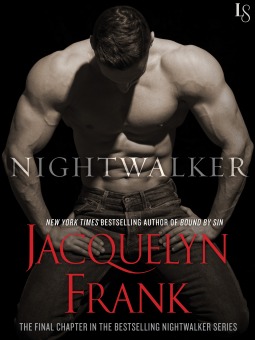 *From New York Times bestselling author Jacquelyn Frank comes the final chapter in the Nightwalkers saga! As the momentous showdown with a powerful demon unfolds, a passionate encounter breaks the ultimate taboo.*

Kamen is a Bodywalker, an ancient soul reborn in one human host after another. He’s also a prisoner of his own kind: for it was Kamen who released Apep, the deadly god who threatens the existence of their world. To atone for this grievous error, Kamen accepts an urgent mission: to convince the other nations of the Nightwalkers to set aside their centuries-old conflicts and band together. If he fails, all will be lost. And no tribe presents a greater challenge than the Wraiths, the spectral beings who are feared and despised for their lethal deathtouch.

Kamen makes first contact with a stunning, ghostly pale beauty named Geneviève. Part Wraith and part human, scorned as a half-breed, Viève shares the hunger for redemption—and for connection. Her scintillating touch holds the kiss of death, and yet it makes Kamen feel more alive than ever. Soon his lips are pressed against hers, sending Viève into fits of desire and forging a bond that breaches the divide between them. Now they must unite all the Nightwalkers, from Vampire and Shadowdweller to Djynns, and fast—for Apep is ready for war.

In this the fifth book in the World of Nightwalkers, Jacquelyn Frank brings all of the characters from her previous books together for this final saga.  She also introduces a new love story between two totally unexpected characters, Kamen the Bodywalker and Genevieve the hybrid Wraith! Ms. Frank creates a world within a world that functions side by side with the human race.  The twelve Nightwalker races must find a way to work together if they are to save not only themselves but also humankind. The only problem is six of the races are hidden from the other six by a curse and a way must be found for the twelve to communicate and lift the curse.  If not, the world will be destroyed by the Imp god, Apep.

Feeling guilty for his part in the release of Apep, Kamen sets out to find the last three Nightwalker races and form an alliance.  The first group he encounters is the Wraith, the most deadly.  He meets Genevieve a hybrid wraith and cannot understand the feelings she is causing him to feel.  Kamen has not felt sexual attraction in this life.  He is a scholar and dedicated to his mission, all he has to do is convince his body and mind of these facts!

It is hard being part of a race but excluded at the same time.  Vieve has all the powers of a Wraith but does not look or feel like one.  She appears more human and because of this she is made fun of while living with her family but is treated more like a servant.  When she meets Kamen, her attraction to the Bodywalker is overwhelming.  Her race do not touch or give compliments, they get together to procreate only.  So when she is sent with Kamen as the representative of her race, she is stunned. This is a unique and totally absorbing paranormal romance that you will not want to miss. Find out if the Nightwalkers save the world!