Review of Beneath the Secrets (Tall, Dark & Deadly #3) by Lisa Renee Jones 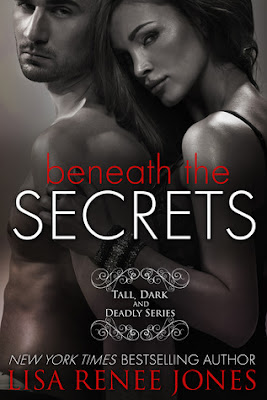 Beneath the Secrets
The complete volumes (Prelude - Part 4 the conclusion)

A complete novel originally released as a serial
Includes:

Prelude:
Blake Walker left behind the ATF when the drug cartel he was hunting cost him the life of his fellow agent, and fiancee. Now, two years later, he's working with his brothers at Walker Security, but he's living fast, hard, and wild, until he reaches the ultimate high...revenge. And he's close, so close he can taste it. He's one meeting, one woman, away from being inside one of the money laundering shells the cartel operates.

One woman....
One dangerously hot night....
AND

Part 1
Two paths collide.
Two people who will do anything, including sleeping with the enemy, to avenge or save someone they love. But what if everything isn't as it seems and the enemy isn't the enemy at all? Can these two broken people drawn together by their sizzling hot attraction see beyond their pain and their need for vengeance and find the trust they will need to survive a vicious drug lord's wrath before it's too late?

Part 2
Vengeance is all Blake Walker has lived for....until he met her. She will bring him to his knees but will it be in passion or pain?

Part 3
Blake has discovered Kara's true identity and with it the past that has haunted him for two years will be recreated. She is everything that will destroy him and the only one who can save him.

Part 4
Kara and Blake will face the ghosts of their pasts, but will those ghost destroy them or forever bind them?

Overall Rating:  4.5 Rockin’ ★★★★☆
Do you really ever know who you can trust, or who has evil intentions? Revenge is like a worm in an apple, it slowly eats away at the core until everything left is rotten. In Lisa Renee Jones novel, Beneath the Secrets she delves into the underbelly of organized crime. In this the third book in her Tall, Dark, and Deadly series, Ms. Jones unveils the last Walker brother's story.

Blake Walker has lived fast and furious for the last two years, but always searching trying to find a way to wreck havoc and vengeance on those that took the life of the woman he loved, his fiancé. Two years of carefully constructing a plan and infiltrating the group responsible for killing her.  Now he is almost there,  just one more hoop to jump through and he will be there.  But there is a problem and her name is Kara.  A woman that stirs him and causes life to flow through his veins again.  Only problem is Kara has secrets and she is more than she appears to be.

Women are disappearing without a trace.  When Kara Michaels, a FBI agent's sister disappears, she has no choice but to go undercover and find her. That means infiltrating a sex ring, a drug trafficking organization in order to locate her sister. Of course this is all off the books, she is out there alone, a rogue agent.  While working on finding her sister, she meets a man that makes her burn and feel things she shouldn't.  How can she, he is part of what she is trying to take down.

Fast paced, action packed drama filled pages sizzling with sexual tension and sensual dialogue highlight Ms. Jones talent as a storyteller and creative artist.  Her clever use of characters to support the tempo and mood of her plot is remarkable.  I fell in love with the Walker brothers and their significant others.  This is another excellent addition to my library by Ms. Jones.
Buy Links:  Amazon US/Barnes and Noble