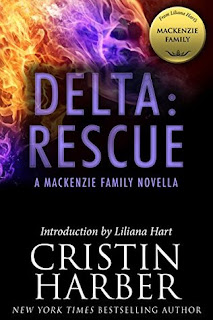 From Liliana Hart’s New York Times bestselling MacKenzie family comes a new story by New York Times bestselling author Cristin Harber... When Luke Brenner takes an off-the-books job on the MacKenzie-Delta joint task force, he has one goal: shut down sex traffickers on his personal hunt for retribution. This operation brings him closer than he’s ever been to avenge his first love, who was taken, sold, and likely dead. Madeleine Mercier is the daughter of an infamous cartel conglomerate. Their family bleeds money, they sell pleasure, they sell people. She knows no other life, sees no escape, except for one. Maddy is the only person who can take down Papa, when every branch of law enforcement in every country, is on her father’s payroll. It’s evil. To want to ruin, to murder, her family. But that’s what she is. Ruined for a life outside of destroying her father. She can’t feel arousal. Has never been kissed. Never felt anything other than disgust for the world that she perpetuates. Until she clashes with a possible mercenary who gives her hope. The hunter versus the virgin. The predator and his prey. When forced together, can enemies resist the urge to run away or destroy one another?

WOW…I am amazed at the remarkable storylines that Cristin Harber consistently  comes up with.  In her latest released novella, Delta Rescue, she reveals an edgy, suspense filled side in this story as she delves into the underbelly of society. When you think edgy, kick it up another notch and you will have only touched the surface of Ms. Harber's amazingly creative mind!  Madeline and Luke's story is filled with angst, kink and eventually maybe, true lasting love.
Smoking, sex-a-licious, and lick worthy are just a few words to describe the hard hitting bad boy, Luke Brenner.  The only thing this badass cares about is revenge and finding those responsible for the kidnapping and selling into slavery of his first love. Each day he gets closer to those responsible for her disappearance.  Live, work, hunt is his existence.  On a mission to save a group of women he never expected to meet a woman that would turn his world upside down, Madeleine.
Feared, respected and hated by all as the heir apparent to her father's empire, Madeleine Mercier lives for the day she can bring it all down.  She has learned all the things necessary to rule and control his kingdom.  There is no one she can trust, no one that she can turn to for help, she is alone.  Until the night she was almost arrested by a man she cannot forget, Luke Brenner.  He had a DEA badge, but Madeleine does not believe that for a moment.  Maybe he can help her, maybe no one can!
If you are looking for a great read, look no more!  Ms. Harber has outdone herself with this fantastic book.  It has everything you could look for in a read!  Great addition to my library!