Review of Six by Hilary Storm 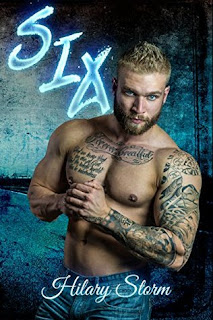 HOT MC Stand Alone!
*****Warning***** Not intended for those 18 years or younger or people sensitive to violence, strong language, or graphic sexual situations.
Blade Montgomery takes shit from no one. He's a leader. He's a fighter. He's the President of an MC. His nature to take care of others precedes his will to do anything for himself. He's a protector. He's a no nonsense kind of guy with the sexual appetite of a beast.
Tori Douglas is an independent woman who doesn't need a man. She finally has her life on track to move forward and the last thing she needs is a bad guy to mess it up. She's sassy. She's sexy. She's strong and she'll have the men begging to have a chance with her, but none of them will.
He's determined. He's stubborn and she's just as bad. What happens when these two meet? Will he tolerate her feistiness? Or will he have her out on her ass to prove a point? She's his sister's best friend and he refuses to mix family with the club life, but they have a connection much deeper than either of them can fight. Life is crazy and life is short, so how will these two make it through the challenges that explode around them?

Overall Rating:  4 Rockin’ ★★★★
He is a hero with a dark soul and she is the little girl he rescued from a dark, filthy alley when she was only six years old. This is an unbelievable story of abuse, a murder mystery and a once in a life time love. Hilary Storm has out done herself with this beautifully written love story, Six that demonstrates anything can be overcome with the right person by your side.  Tori and Blade’s story while filled with difficult situations is also a story of love that finds a way.
Blade’s name was earned!  As acting Prez of his MC, his focus is on rescuing and protecting the weak and innocent from those that would defile them. His mission had started with his own life and then expanded after he saved a young girl from rape and death at the hands of a pedophile. Years later he cannot believe that she is his sister’s best friend and the feelings she stirs are not brotherly. Recognition brings ownership and an overall desire to protect and claim her as his.
Nightmares refuse to let go of her.  Her mother’s death and the replaying of the things that happened to her that night refuse to let go.  Tori Douglas has only one thing that brings her peace and that is the memory of the man that saved her.  Her dark knight that saved and protected her is her best friend’s brother.  Now her hero is once again in her life, protecting her and keeping her safe from the horrors that have resurfaced from her past.  Will Blade be able to save her this time?
Ms. Storm creates characters that are charismatic and at the same time human. She weaves tales of love, mystery and drama with a flair that enthralls and captivates her readers until the end.  This book is filled with sexual tension, interaction and sizzling hot scenes that scorch the pages.  I look forward to more from this talented author.