Review of His Light in the Dark by L.A. Fiore 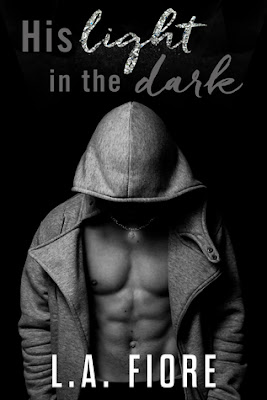 My first memory was of a slap, hard across the face: the sting on my cheek and the jarring of my bones as I slammed back into my bed. It was my dad who had hit me.

I had been four.

My new neighbor cared, rescued the twelve-year-old I had been from a beating. Always thought I'd suffer the nightmare alone, I was wrong.

Mace Donati saved me that day in all the ways a person could be saved.

And his daughter, Mia, she became the friend I had always wanted, my conscience when my own faltered, the light that led me home when I had lost my way.

The girl who grew into the only woman I would ever love.

But when you realize you're more like your father than the good people who took you in and gave you a home, the only way to return their kindness is to let them go.

I let them go, got so far lost in the shadows I couldn't remember who I was anymore. Mia never gave up on me. She fought for me, kept the light on so I'd find my way back.

And when I did, life threw us a curveball. I had to hurt Mia in order to save her.

But when my past comes back to haunt me and I almost lose her, I'm ready to fight for her...fight to find a way back into her heart while keeping the demons from my past from finishing what they started.

When all you have ever known is hate, violence and abuse, the first time you are shown how life really should be it’s illuminating!  In L. A. Fiore’s, His Light in the Dark, she brings light where there was only darkness, hope where there was only despair and eventually a happily ever after for her main characters.  This is Mia and Cole’s story as they journey through life searching for the light that only true love can shine.

His first memories are of his dad hitting him, of being hungry and his tummy hurting.  His father’s goal is to destroy anything or anyone that Cole cares about.  Cole was saved from a severe beating by his next door neighbor.  From that time on, Cole learned what a real family was really like.  What it was like to be part of one.  Mace and his daughter Mia became his real family after that day and he would do anything for them.  But sometimes life does not go according to plan and you have to keep you eye on the light to come through the dark.  Mia Donati is not only his friend, but also his light.  He may not be good enough for her, but she is the one for him.

He was her friend, a part of her family, until the day she looked at him and saw a man where a boy had been.  Cole is the one she wants forever, but he keeps pushing her away.  Mia is determined to bring the light back to his eyes and the laughter to his heart again.  She refuses to let him go and will fight to keep him.  But life has a way of taking away the things that mean the most and Mia’s loss is devastating.  Cole was her constant, her protector and they will come out on the other side together.

I am totally enamored with Ms. Fiore and her this amazing book.  She not only created a unique and unforgettable story, but she wove beautifully written characters into it.  The drama, angst and sexual tension sizzle throughout this narrative.  Each character plays an integral part of the plot as it unfolds with its twist and turns. This is a must read for all lovers of a good romance with unexpected intrigue.  It is an excellent addition to my library!