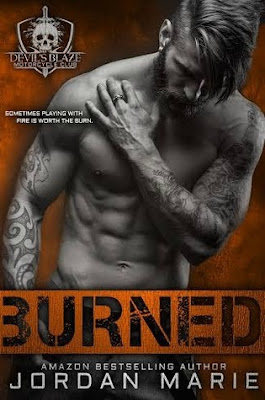 He is a very bad man. There is nothing good about him…
Unless you count the things he does to me between the sheets. Those are good, very good.
Everything else about him is bad to the core.
One drunken night of bone-melting sex should have been the end of it—especially since I woke up alone.
Until he shows up at my door complete with handcuffs. I hate him for what he’s doing. Too bad my body can’t resist him.

She has a body that makes men beg. I had to have her.
I didn’t realize getting my dick wet inside of her would be a drug---one I’d crave over and over.
Katie’s past brings me to her door. I should walk away. I can’t.
My President asked me to do this job and technically, I am. I’m doing her against the wall, in the shower, on the counter, the table and occasionally even the bed.
The heat between us is intense and white-hot like an open flame.
I can’t walk away, even for my President, the man I swore to follow into hell.
I warned her I am no one’s happily ever after. I’m too dark.
I’m more of a nightmare.
She chose to play with fire. Hell, I did too.
It’s too late, now we’ll both be BURNED

Suspense, sex filled pages and sizzling hot alpha males turn Jordan Marie's second book in the Devil's Blaze MC into a sensual journey that you will not want to put down until finish the last page!  Burned is the second installment of a trilogy that continues Skull's search for Beth and their daughter.  He sends Torch, a trusted brother to find them and return them to him, but as in any great romance there are roadblocks everywhere!  Jordan Marie delivers an intricately woven, action packed romance that leaves her reader wanting more!

Torch has watched his leader and brother mourn the loss of his beloved Beth and their child.  He does not understand the burning sorrow that is consuming Skull, until he meets an elusive beauty at a bar and becomes obsessed with her.  When he finds out that she is Beth's twin, everything blows up in his face!  Katie is more than just a job, but he stands to loose her before he can claim her.  Lies have been told and truths are hidden.  Will he be able to overcome the deceit?

She has learned never to trust anyone, a truth that has been drilled into her all her life.  So why is she feeling the connection to Torch, a known player and womanizer?  Katie's first priority is her sister and niece, keeping them safe and away from those that want them all dead.  Discovering that Torch is playing her should not be a surprise, but she so wanted to believe his lies.  Is there a way out for them, a way that will allow her and Torch to have more than a one night stand?

Delve into the world of MC life and the vengeance they crave when crossed!  A world where life is not guaranteed and love is a rare gift.  After reading this book, my question is when can I have the next one?  Excellent addition to my growing Jordan Marie library!