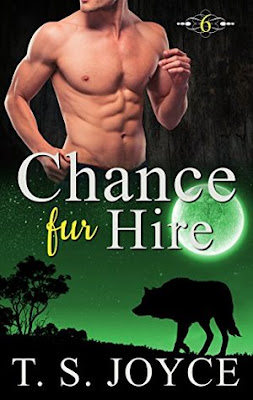 Emily Vega must avenge her father, and as the last of the Hell Hunters, she has one mission: destroy the Galena pack. Werewolves are carefully camouflaged monsters intent on taking over the world—or at least that’s what she’s been taught—but one meeting with the werewolf she’s hunting, and Chance Dawson is changing her mind, little by little. He is caring, protective, and sexy as hell, and the more she gets to know him, the more she thinks all of her Hell Hunter training has been a lie. What if werewolves aren’t the bad guys? What if she’s the monster? Chance knows he’s being hunted. What he can’t figure out is why the alluring new woman in town has her sights set on him. He’ll draw her in close, but just to show her she’s wrong about him. But when that dangerous siren starts calling to his wolf, he knows he’s in over his head. And if his alpha, Link, finds out what Emily is doing in Galena, he’ll destroy her. Pulled between his loyalty to the pack and the woman he’s falling for, Chance will have to protect her from all sides, because as it turns out…Emily isn’t the only one on the hunt. Content Warning: Explicit love scenes, naughty language, and piles of sexy shifter secrets. Intended for mature audiences.

A werewolf and a Hell Hunter...the hunted and the hunter!  How can the two ever mix?  T. S. Joyce has become one of my all time favorite author's and her latest release in the Bears Fur Hire series, book six, Chance Fur Hire highlights the reason I feel this way!  Ms. Joyce once again delves into the lives of the Galena pack and uncovers a renewal of an ancient evil.  This diabolical plot is the extermination of all shifters, starting with Wolves and the executioners are known as Hell Hunters.

Vengeance kills the soul and can turn a good person bad.  Emily Vega had worshiped her father.  She believed everything she had been told about the evil demon wolf shifters.  But reality is often different from what you are told by people that you trusted.  When Emily met Chance, her entire world shifted.  Chance was wonderful, caring, loving, loyal and not the demon she was told he was.  He is the man of her dreams, her mate and she is going to prove to him that she is no longer a Hell Hunter!

Chance loves his family, his pack and will do anything to protect them.  When he meets Emily, he senses something is not right.  That she is not being honest.  However his wolf is bonding to the woman.  When he realizes that Emily is connected to the Hell Hunters, and wants to change teams, he agrees to help her learn the truth about shifters.  But it may not be easy for either of them.  Hatred from her uncle and memories of what her father tried to do to Chance's family, may keep them apart.

As I read this amazing story and reflected on the history of the Dawson wolves, I realized that Chance and Dalton Dawson were descendants of the three Dawson brothers from Ms. Joyce's series, Wolf Brides.  If you have not read this amazing trilogy, I encourage you too!  They can be read as a standalone, but you will not want to miss one story.  Cannot wait to read what is next, great job Ms. Joyce!