~Book Blast: STRIPPED FROM YOU and STRIP ME BARE by Marissa Carmel~ 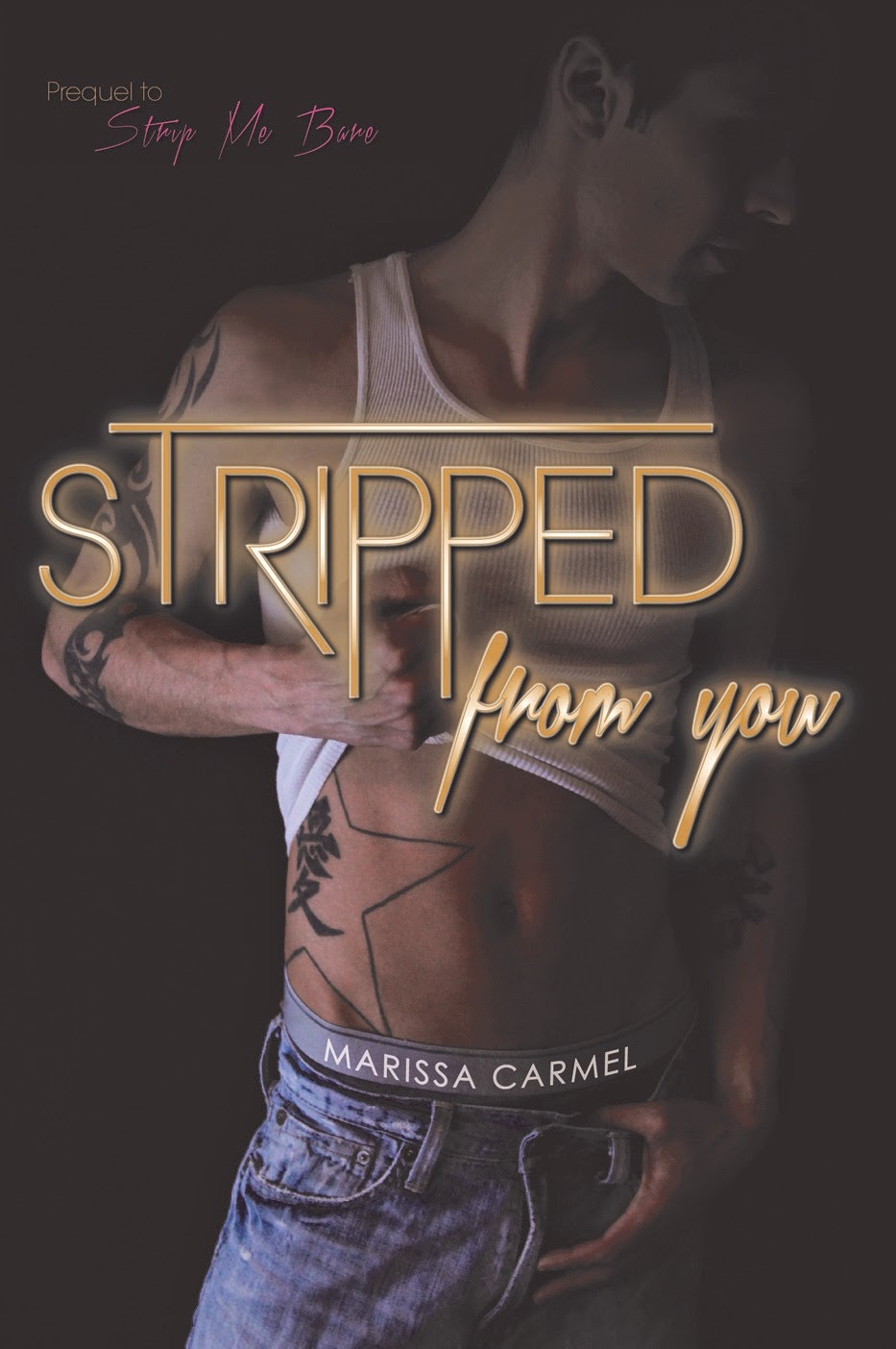 You know how it ends, now see how it all began…

"It doesn't matter how many women touch this body, only one woman has ever touched this soul."

Ryan Pierce doesn’t come from much, doesn’t ask for much, and doesn’t expect much. And he's come to accept that, until, Alana Remington. Alana is the girl who struck the match that lit his world on fire. She's the girl who opened his eyes to more. Who made him believe that just because you have nothing, doesn't mean you are nothing. And he loves her fiercely for it. But, just because you come together, doesn’t mean you stay together. One fateful decision rips Ryan and Alana apart and neither of them are ever the same again.

For five years he's regretted that decision, but the deep seeded anger, shame and resentment has kept him from reaching out. And over those five years, a series of moments have spun Ryan's world in a direction he never saw coming. A world ruled by endless nights, infinite women and the name Jack the Stripper. A world, unbeknownst to him, that may just let two severed hearts collide.

(Stripped From You is a Prequel to Strip Me Bare) 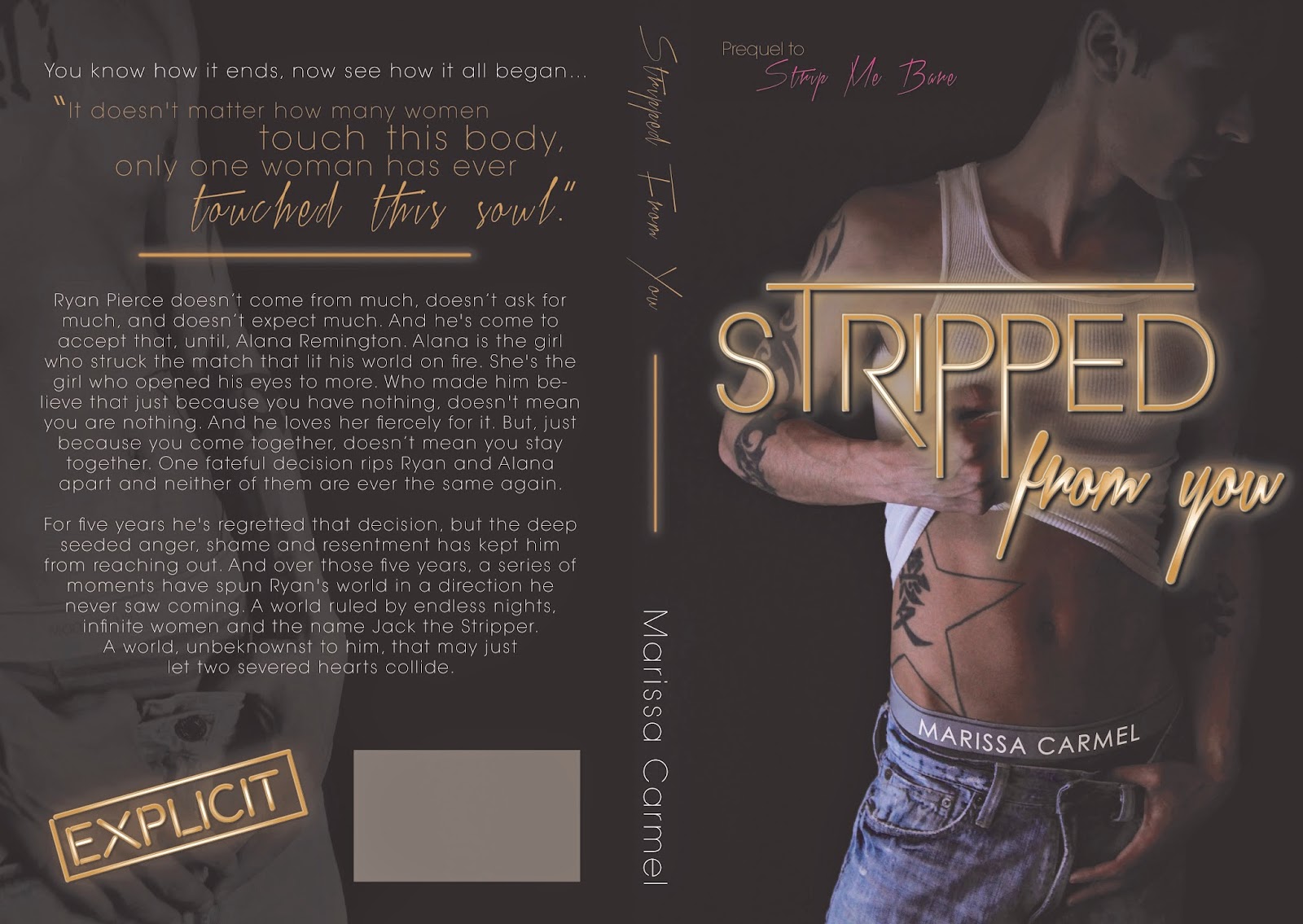 *Author
Note- Stripped From You can be read as a stand-alone novel, but the author
suggests reading Strip Me Bare first.

“Then how about giving me the benefit of the doubt?”

She raises an eyebrow at me, and before I give her a chance to
respond I slam the shot then pull her face to mine. And as my mouth covers
hers, heat rapidly spreads through my body.

She’s momentarily stunned. Her body
is rigid against me, but then she relaxes, parts her lips and lets the tart
liquid slide into her mouth.

I
can’t believe I just did that.


I
can’t believe she just let me.


After she swallows, she lets her lips linger, sucking up the taste of
the sweet shot, causing my nervous system to shift into hyper-drive. We break
apart slowly, but I refuse to let go of the nape of her neck. She just stares
up at me with these enthralling eyes I know I’ll never be able to resist.


“Do you always break the rules?” she asks.


“No, not usually, but you seem to make me want to do crazy things.”


I lick my lower lip, tasting the sweet remnants of her lip gloss
before I drop another shot. I pause for just a beat before lean down and press
my mouth back to hers and let the alcohol flow between us. I flick my tongue
against her teeth right before I pull away. I shouldn’t like this so much, but
I do. I like the way she looks, the way she feels, they way she smells.


There’s
something about her, something ventilating; like she oxygenates the atmosphere.


I catch the cool beats to a song I recognize pumping though the air.
“Do you want to dance?” I ask her.


“There’s only one thing I can do better.” I smirk.


“Draw.” I fire back. “The only thing I can do better is draw. Dirty
girl.” I tease as I grab her hand and lead her out to the dance floor knowing
Mac will look after our drinks.


Once we find a comfortable spot, I start to move to the smooth
rhythm, leaving a little room between us so it doesn’t feel like I’m forcing
myself on her. Drake sings coolly about hot love and affection as we move in
sync to the beat, our bodies brushing and grazing as the music plays on, then
finally coming together in a comfortable unison. I wrap one hand around her
waist as I roll my hips into hers, pressing our bodies as close as they can possibly
get. Alana runs her hands up my chest and hooks her arms lightly around my neck
keeping tempo with the music. She moves lithely against me, inducing my heart,
thoughts, and pulse to race.


Fuck, I’m
drowning in want for this girl.
I slide my hands up under her shirt and

caress the smooth, soft skin of her lower back as she nuzzles her face into my
neck, her warm breath skating across my collarbone, making me instantly hard.


She lifts her head and meets my stare, which I know is filled with
lust and unrepentantly wanton. She bites her lower lip, our bodies still jiving
to the slow seductive music. In a brazen move, I slip my hand up the back of
her bare thigh and cup her ass cheek under the hem of her short shorts. She
gasps as I work my fingers against her, massaging the fleshy part of her
bottom. I’m absolutely aching being this close to her, touching her, stroking
her, grinding against her.


“Are you sure drawing is the only thing you can do better?” she pants
in my ear. 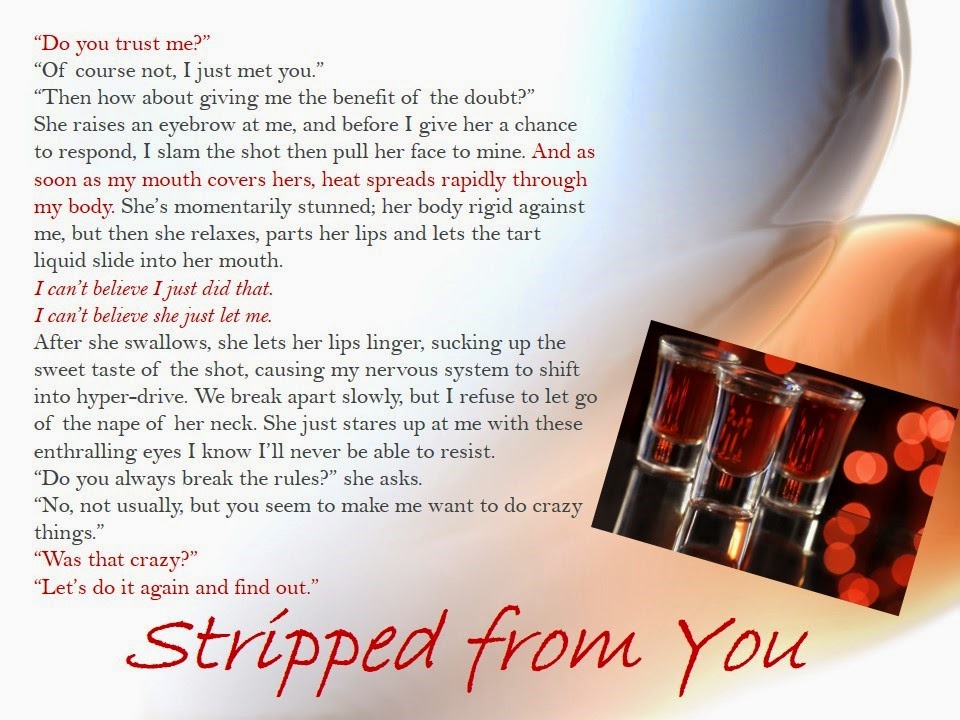 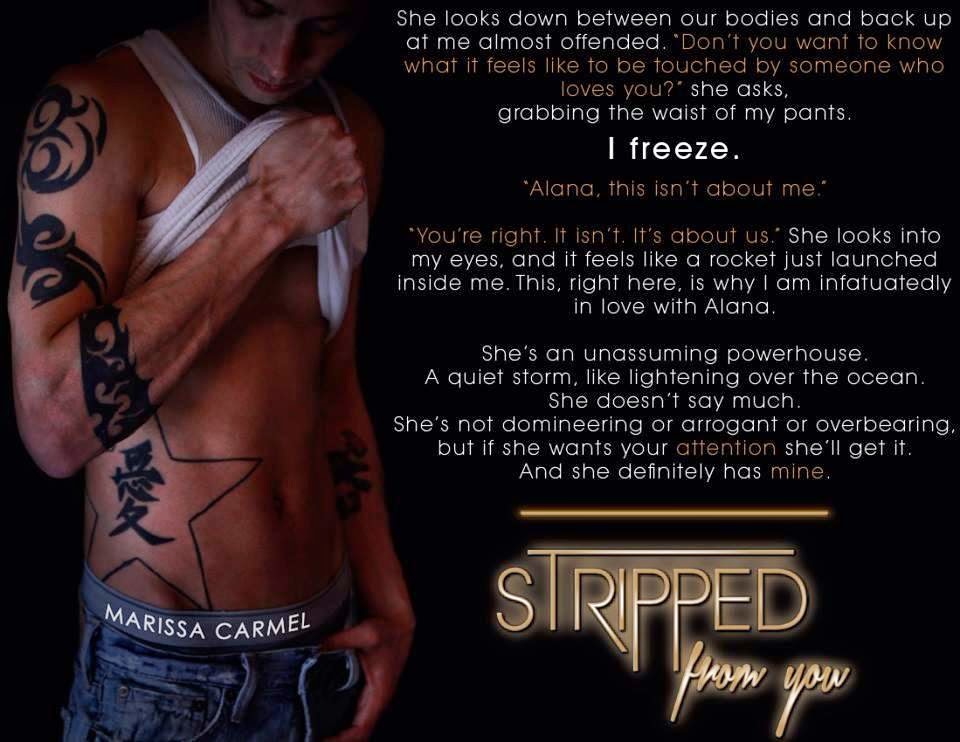 The Other Side- Jason Derulo

Say Something- A Great Big World 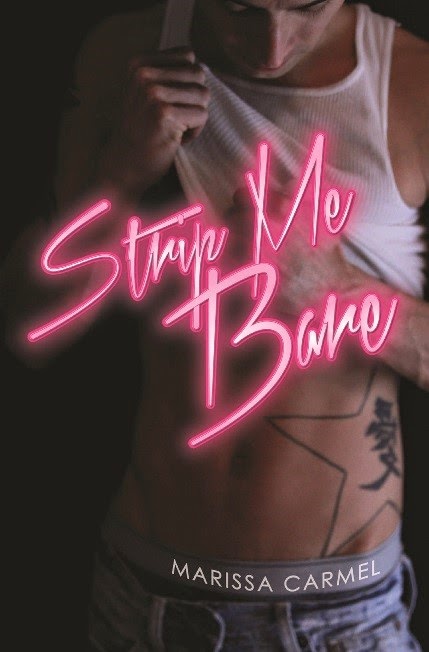 
“I may have had more lovers than you, and I may take my
clothes off for countless women, but you are the only one who can strip me
bare.”


Do you ever stop loving someone just because
they’re gone? Five years ago Ryan Pierce disappeared from Alana Remington’s
life without leaving so much as a post-it note behind. He was the one she gave
her heart to, her soul to, and her virginity to.  So imagine her surprise when she finds him
dancing at one of NYC’s hottest male revues as Jack the Stripper.


Ryan never stopped loving Alana, and now that she
serendipitously dropped back into his life, he’s vowed never to lose her
again.  But being together has its costs,
and challenges Alana isn’t sure she can handle.


She finally has Ryan back; but how in the world is
she supposed to share the love of her life with half of the women in New York
City?


We stop in front of some hanging crystals. They
clink as Ryan pushes them aside, “after you.”
I walk under an orange spotlight, into a small space with a white
leather couch deep enough to lie on and walls a warm golden yellow.


Ryan steps in behind me and presses his body flush
against mine. My mind races.

Is he really going to do this?


Am I really going to let him?


Can I even handle this? Five minutes ago he was
with another woman. Quite possibly in this same room doing God only knows
what.


“Why do you do this Ryan?” I expel. I know he
explained it in words, but I need to experience it to truly understand.


He ambles around me so close; the only thing
separating us is a whisper of air.

“I told you, the money,” he says as he unbuttons
his shirt.


“You said women too,” I watch him cautiously, my
gaze jumping between his eyes and his chest.


“That was before you walked back into my life.
You’re the only woman I want to touch now. The others, like you saw before,
it’s just an act. A business transaction. It’s what I have to do to get what I
want.”


“Doesn’t it make them feel used?” I flick my eyes
up at him.


“It mustn’t. They always come back.”


Ryan stands right in front of me, his shirt
unbuttoned and dangling open. “I won’t lie to you Alana, I’ll never lie to
you,” his tone is hard, but seductive. “I do like the attention. But it’s not
real. It’s my job to sell attractiveness and fantasy, and I do it well. But
that’s all it is, fantasy and I know it. When I’m with you, that’s my real.”


My breath catches when he says the word real. I
can’t help but find the irony in his words; I’m exactly to him what he is to
me. Two people one and the same, both living a double life to get what they
want; a future and each other.


And that is what I want. A future, with Ryan.


I swallow hard, but can’t utter a single word,
because truth be told, I have no freakin’ idea what I want. At least, not in
this scenario.


Ryan starts to rub my shoulders. I think he can
feel my hesitation.


“Why are you so tense? This is supposed to be
fun.”


Fun? The word rattles around in my head. Fun - a
time or feeling of enjoyment or amusement.


Okay, let’s have some fun.


I turn around to face him and our eyes lock. “Show
me.”


“Show you what?” his tone dripping with
sensuality.


“Show me Jack the Stripper.” 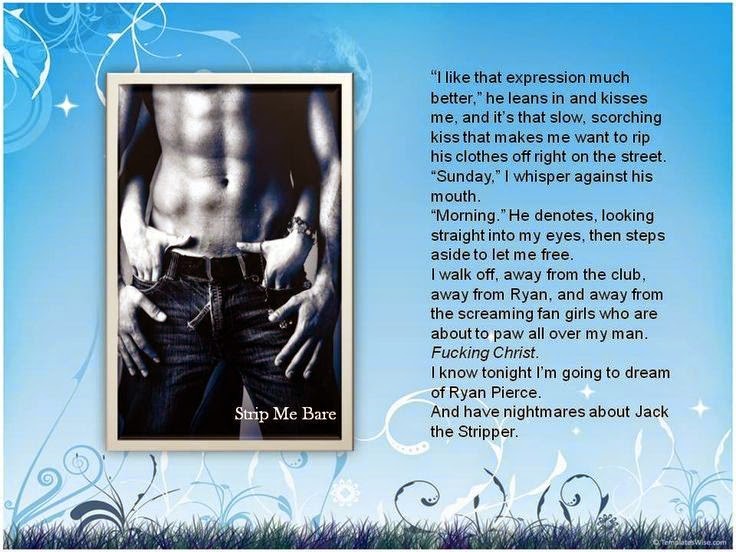 I Know You Want Me- Pitbull

What You Wanted- OneRepublic 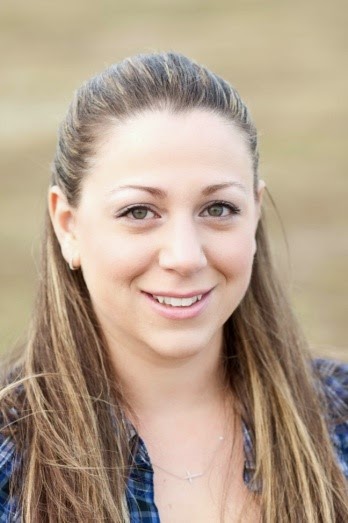 Marissa Carmel has loved writing ever since a
young age. She has a duel degree in History and Political Science, but took as
many creative writing classes in college as she could. She spent most of her
twenties bartending, which is where she met her husband and a multitude of
interesting people. When she’s not reading or writing, she’s hanging out with
her family, experimenting in her kitchen or doing yoga on the living room floor.