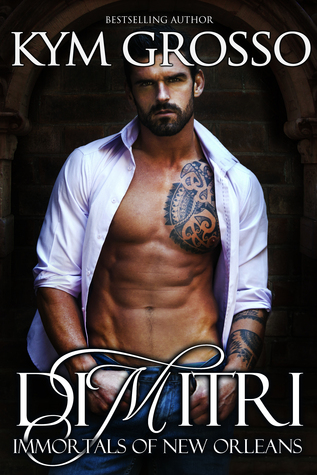 
Gillian Michel, a New York City photographer, conceals a secret hybrid past and mystical abilities. An entire lifetime, she’s deliberately avoided wolves, but a seductive encounter with an irresistible beta leaves her craving his touch, his lips on hers. Passion ignites her desire, leaving her yearning to submit to the powerful wolf who tests her sexual limits.


Deep in the heart of New Orleans, Dimitri and Gillian seek a cure to the parasite maligning his mighty beast. Still on the run from a malevolent force, they lure their enemy into the bayou. Will Gillian sacrifice her gifts to save the man she loves, destroying her own immortality? And will Dimitri eradicate the evil that has invaded his soul while protecting his mate from an adversary who threatens to kill them both?

This book takes up where Leopold leaves off with Dimitri leaving the Big Easy after their return from their decent into Hell.  Dimitri’s knows that something is wrong with his wolf, he is not able to shift into his wolf.  He heads out on a cross country trip on his motorcycle and ends up being attacked by rogue wolves.  He is rescued and healed by a mysterious woman who refuses to allow him to protect her and keep her safe.  This is the beginning of their journey towards each other.

Gillian is a tiger shifter that is being pursued by an Alpha Wolf that wants her as his mate.  She manages to escape from him only to find herself helping a wolf shifter from being killed by a group of the wolves that were trying to recapture her.  The attraction she feels for the wolf sets her on edge because she has always been told to stay away from wolves.  It was said that if she found her mate among the wolves she would lose her tiger and immortality.  Gillian slips away from Dimitri and tries to flee from him and the wolves that are pursuing her but is recaptured.

Dimitri arrives in time to save her from being beaten and raped.  He promises to help her get back home and will protect her until she is safely with her family.  Gillian knows that Dimitri needs to return home and locate a witch to heal his wolf.  If he stays with her, he could lose his wolf and immortality so she once again gives him the slip and returns to New York. Her brother is the Alpha of the NY pack and she is going to ask for his help and protection from the wolf that wants to mate with her.  Will he help her, a sister he did not know about?  Can Dimitri find a cure for his dying wolf?  What will happen between Gillian and Dimitri?  Is Dimitri her mate?

Would I recommend this book:  Yes! Let the good times roll when the immortals come out to play in this fast pace, sexy romance set in New Orleans.  This book involves a hot sexy Beta that finds a magical hot tiger shifter that keeps to herself but finds she is attracted to a wolf.  It will be his job to convince her to come out play with him.

Would I recommend this author:  Yes! This author does not fail her reading audience with her incredible books!  Her Paranormal Romances are worth the read and when you finish one you will be impatient for the next to be released!