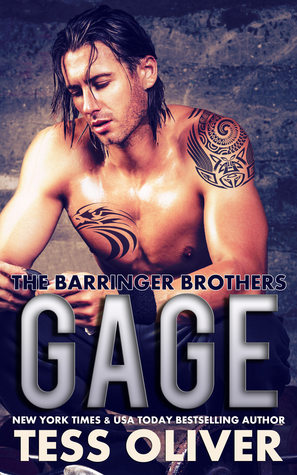 *Gage is part of the Barringer Brothers series but can be read as a standalone.*

After nearly losing his friend in a logging accident, Gage Barringer is convinced now more than ever that he needs to find a different job. But his side business of breaking colts at the small Montana ranch he inherited from his grandfather doesn't earn him enough money. He has his mind set on running The Raven's Nest, a popular bar and restaurant near his ranch. The original owner has died and Gage is waiting for it to be put up for sale. But there is a five-foot-four, brown eyed, obstacle in his way, an obstacle with lips made for sin and a voice made for breaking hearts. And Summer Donovan is one road block Gage Barringer won't be able to find a way around.

This is Gage’s story, the eldest brother in the Barringer Brothers’ trilogy. He is a gentle giant that is too sexy for most women to ignore unless they are blind or dead! Gage is a lumber jack and uses his size and strength to complete his work and at the same time keep those he works with safe. He is a giving man that seems gruff and distant, but is all about his family. Recently he had started planning to purchase a restaurant and retire from work on the mountain logging. The only problem with the plan is the previous owner had left it to his granddaughter that lives in California. The restaurant is really losing business and Gage feels that it will not be long before she is ready to sell it.

Summer has the voice of an angel, that once heard is not easy to forget and with looks that enthralls most men. She is true to her California lifestyle until the day she is hit on by a record company executive that wants her as part of the record deal, discovers her boyfriend in bed with her best friend and her controlling mother tells her it’s all her on fault! What’s a girl to do, go to Montana and run her grandfather’s restaurant, that’s what you do! When she arrives she realizes she may have bit off more than she can chew. The restaurant, The Raven’s Nest, needs lots of TLC plus some heavy duty cleaning. She digs in and with the help of some of the employees; Summer begins to revive the business.

Her grandfather not only gave her the restaurant and his house but enough money to kick start things. When Summer meets Gage everything she thought she knew flies out the window! He is handsome, sex on a stick and a really big guy but Gage is so much more than his appearance indicates. Gage is a hard man to get to know but the effort is worth the rewards of finding the man below the exterior. Will Summer and Gage find their HEA or will the past destroy their chance? Will they both be able to hold on to each other or will pride separate them?

Would I recommend this book: Yes! This is a story that will pull at your heartstrings while making you cry like a baby. Love knows the heart and in this story two lonely souls find each other’s. There is hot sex, laughter and suspense when you least expect it. Great read for those looking for a HEA!

Would I recommend this author: Yes! This an amazing author that only gets better with each book she writes. I am always waiting to read her next release as soon as it is published.