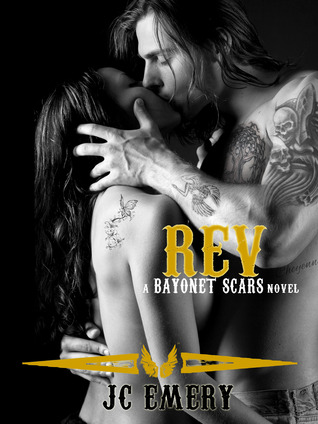 Everyone belongs somewhere. Even the misfits.

With the looming threat from the Mancuso Crime Family, the Forsaken Motorcycle Club is preparing for a war that could destroy them. Grady, the club’s Sergeant-at-Arms, knows that love makes you weak, and he has zero interest in adding to his liabilities– especially now. He’s already got his teenage daughter who keeps him on his toes and a beef within the club that could fracture his relationship with a fellow brother for good.

For Holly Mercer, her life is finally getting on track and the last thing she wants is trouble from her hometown’s resident outlaws. Keeping her nose clean is easier said than done, when suddenly she finds herself embroiled in club business. Holly might like the idea of being with a real-life bad boy, but even being in the same room with tough-as-nails Grady flusters her.

When Holly inadvertently finds herself on Mancuso’s radar, she has two choices: trust that Grady will protect her, or continue to refuse the club’s help. Both roads are dangerous, but only one has the chance to damage her beyond repair.

Love is never more dangerous than when it can destroy you.

In the third book of the Forsaken MC series we learn more about Rev and meet Holly Mercer.  They live in the same town but may as well come from different planets!  She is the good girl that lives by the letter of the law and he is the bad boy that does it his way.  They have nothing in common, or do they?

Holly Mercer has returned to her home town and the family that she has never felt that she was good enough for. She has the bad habit of becoming involved with the most needy, self-destructive people around, including her best friend Mindy. Mindy is a drug addict, an alcoholic and her father is a policeman.  Holly is there to support Mindy and help heal.  She finds a job at the local high school and is assigned Cheyenne Grady, a senior that is in jeopardy of failing. After trying without success to contact and set up a conference with Cheyenne’s dad, Holly is left with no choice but to go on a home visit.  The man she meets is not what she was expecting, a member of the local outlaw MC and so hot just looking at him burns.

Grady is the Sergeant at Arms for the Forsaken MC. He is raising his teenage daughter by himself and trying to teach her to be self-sufficient but it’s not an easy job. When he finds a woman on his doorsteps that says she needs to talk with him about his daughter, he immediately puts her in her place.  No one tells him how to raise his daughter!  Who does this woman think she is?  Everything has gone crazy at the club, his best friend Chief is dead and for what? Now he has to deal with a crazy woman from the school trying to tell what to do!  So why does he find himself thinking about her?

The club is being hit on all sides by the Mancusco Mafia. Since the kidnapping of their leader’s daughter and the capture of her twin brother, war has been declared.  Will Holly discover that the MC world is for her?  Does Grady want a relationship with her?  Is Holly really a bad girl after all? Read this amazing story and you will not be disappointed at the conclusion!

Would I recommend this book: Yes. This book has it all!  An MC brother that falls for his teenage daughter's counselor and of course lots of hot sex follows! It also is extremely violent and some parts are not for the faint of heart. This is an outlaw MC that is at war.

Would I recommend this author: Yes.  Each book that this author creates is better than the previous.  J.C. Emery is a remarkable example of how MC books should read! I look forward to reading more from this amazing writer.