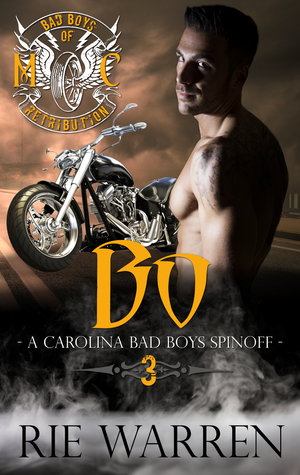 *From the world of Carolina Bad Boys . . . Bo Maverick is ex-Force Recon and a force to be reckoned with.*

Bo:
I’m a lover, not a fighter. Yeah, right. Talk about bullshit. I’ve been fighting all my life, and I know zip about love. Frankly, I don’t want to. More than bullets whizzing past my head or the very real possibility of ending up dead, love scares the shit out of me. I’m used to guns and killing, blood and dust.

That’s what I feel for this woman, my goddamn shrink, Veronica. Doctor Hartley digs inside my head. She asks me questions, which I never answer. I’d much rather take the smart, sexy Doc to bed, but I can’t because of our clinical relationship.

My last Force Recon mission destroyed any semblance of humanity I had left. Those little triggers go off all the time now. When I’m asleep. When I’m awake. When the memories are raw. I bolt up, at knife point again, but there’s no enemy now.

Just Veronica and me.

Veronica:
Veronica. Doctor Hartley. I told Bo to call me Ronnie like everyone else, but he refuses. He shows up like he has a cattle prod shoved up his ass and sits through the allotted hour for his counseling session impervious to every approach. He’s powerful, forceful, explosive. He doesn’t scare me.

My marine doesn’t speak, but his sharp gaze pierces me all the same. He watches me with all the greed of a hunger never sated, a need never fulfilled. A desire never explored. He stows his secrets safely away, but I’m patient. I’ll get to him if he doesn’t get to me first.

And when I have him? I’ll want him forever. I know this. But I can’t. His past might be complicated, but mine is a minefield, one that will blow up in our faces before all is said and done.

Too bad. We could be so good together.

PTSD (Post-Traumatic Stress Disorder) is an often overlooked illness that many soldiers come home from war suffering with!  In Bo the third book in Rie Warren’s Bad Boys of Retribution MC this disorder is addressed through the eyes of one of the main characters, Bo. The devastation it can cause families of these returned warriors and the horrific nightmares they constantly relive, often destroys them both. This story is how Bo and Ronnie find love while pulling each other out of the abyss that threatens to engulf them.

He was not able to go home to his family after he was released from serving his country.  The horrors of war were embedded in his soul.  Paranoia was always sitting on his shoulder, watching and waiting.  He was a powder keg waiting to explode.  Brothers of the Retribution MC had his back.  Yet it was still not enough, nothing was enough until she walked in the door and everything changed.  Dr. Victoria Hartley was a shrink and she wanted to help by digging inside Bo’s head, but he couldn’t get past the LUST at first sight!

The past has a way of finding you regardless how hard you try to stay hidden and now she wants to let someone in, share her secrets.  Ronnie knows that she can help Bo if he will give her the chance.  Every time they seem to take a step in the right direction, he acts inappropriately and she does not want to stop him.   Will they be able to help each other?  Read this remarkable story to find out!