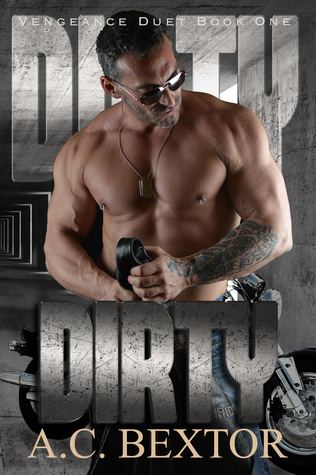 A seemingly innocuous five letter word until you pull back the layers of its meaning.

Imprisoned in a small room within the walls of the Satan's Creed Motorcycle Club compound, Casey Richards struggles to survive the only life she was raised to know. Her mother, a club whore, and her father, an unknown outlaw she’s never met, Casey’s fate is all but sealed in the eyes of the club.

Trapped in a loveless marriage, and with no children of her own, Emma Carsen is the only living soul willing to fight for her niece, Casey. She’s all but given up on saving her until the one man she’s longed to see again unexpectedly finds his way back to town and into her life.

Max Taylor, former-biker of a disbanded MC, has been holding onto reasons to avoid coming back to the small town he grew up in. The same ghosts that drove him away eventually force Max to find his way back. Now that he's home, he may be Casey’s only chance for freedom.

In order to get to Casey, Max must find a way to infiltrate the MC. Setting up a meet with Hoss, Satan's Creed’s President who’s known for his depravity as much as his double-crossing ways, it’s made clear that forming an alliance is going to be more of a challenge than he expected. Now he must prove his loyalty to the club and in doing so, he’s forced to get his hands…

Plots within plots, storylines intertwined and social issues addressed flow through this amazingly intricate novel Dirty by author A.C. Bextor.  In this first book from the Vengeance Duet series, Ms. Bextor once again demonstrates her ability to mesmerize her reader while creating an unforgettable world of love, vengeance and hauntingly moving characters.  As I read this book, my emotions ran a gamut of highs and lows. At times there was laughter, love and hope then depression, hopelessness and what will happen next.  This is Emilyn Carsen and Max Taylor’s journey to find lost love, vengeance, and redemption!  You will not want to miss one word of their remarkable story.

Born into a nightmare, Casey is the product of her mother a club whore and an unknown father.  Her only bright spot is her memories of her early years, before she became Dirty, Unclean and Unloved! Now Casey belongs to an MC at the age of eleven, she is caged and without hope. She does not realize that she has a champion in her mother’s sister, Emilyn.  A champion that will do whatever has to be done to free her from the life she lives in!  Emilyn turns to an old friend that has returned to home, Max to help her free her niece.  The truth is that Emilyn has never forgotten this man, the man that she wanted but that belonged to her sister.

Max is a man that has tried to run from his past and the nightmares he cannot escape.  He has lived a rough life, done things that haunt him but he now finds himself home again, where everything started.  When he sees Emilyn again he cannot deny his response to the woman she has become, but now there are too many things standing between them.  When she asks him to help her, he cannot say no even though it means assuming the bad boy mantle he left behind.  He will do whatever is necessary to get Casey out of the hell she is living in and keep Emilyn safe!

I fell in love with Max the man, the bad boy!  The characters in this book are so well developed that you cannot help but fall into their lives and feel their emotions.  The only thing that I can say about this book is WOW and when can I have the second half?