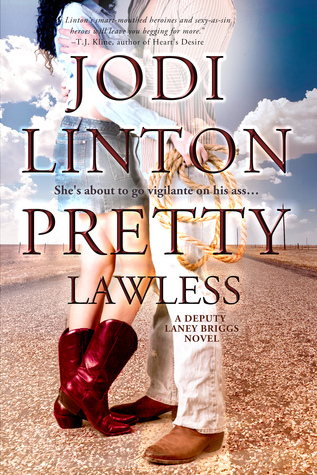 She's about to go vigilante on his ass...

Laney Briggs was almost certain that her sexy-assed Texas Ranger, Gunner Wilson, was gonna pop the question. Instead, he went and pulled one helluva fast one—he arrested her best friend, Luke Wagner, and skipped out. Now Pistol Rock's firecracker deputy is ready to go Wild West on Gunner…if she can just keep that raw, sexual chemistry under control.

Gunner was planning to propose, and it all went to hell. Now he's boots-deep into an investigation with ties to the Dirty Southern Mafia and corrupt cops. Yep, Laney is definitely gonna have his hide. Especially when she finds out just how much he's been keeping from her…

But Laney has a weakness for Gunner's delectable cowboy hotness. And for him, she will break every rule in the book—including the ones she's sworn to uphold.

Deputy Laney Briggs is at it again.  She's driven in her need to find the truth and will do whatever it takes, literally, to find out the facts.  Even if it means she has to undermine her favorite sexy Texas Ranger, Gunner Wilson.  Although, her heart belongs to Gunner, she enlists the help of the flirtatious hottie, Marshal Colt Larsen who stokes her fire in more than one way.  Although, finally getting what she wants with Gunner opening up, they are all thrown into a whirlwind of craziness that will leave you begging for more.

Picking up from the last novel, Deputy Briggs is hot on the trail of finding out why her delectably seductive dear old friend Luke Wagner was arrested by her sexy Texas Ranger. There are so many twists and turns throughout this final novel that you will be completely entranced, while delightfully amused by the created characters.  Jodi Linton has a way with words that never ceases to amaze me.  The way the story ends showered me with bliss, even though I was extremely saddened that the story was over.  You make me happier than a two peckered dog, Jodi!