A man who has seen everything

A new vision of the future.

For over four centuries the Air Elemental, Nodin Osi, has protected the very air we breathe. Yet when he returns to his ancestral homelands to recruit a beautiful ally, he’s literally set adrift when someone else takes control of his gifts.

Blind since birth, Kamali Kiwidinok’s can only see the vibrant auras surrounding each human. She blusters into Nodin’s world armed with her special vision only to discover that Nodin is the one person she can actually see.

Quint, an insidious creature composed of dark matter, returns with strong adversaries and stolen magic, holding nothing back in his pursuit of the most powerful witch in history. Unaware the Elementals have developed a spell to banish him from this plane, he relentlessly pursues his goals.

Plunged back into darkness, Kamali must stand against her enemies before helping the Elementals in their fight against Quint. Will Nodin make the ultimate sacrifice for Kamali? Or is the future between a human and a peri-mortal lost in the wind?

With vision there is hope. With hope there is love – Nodin Osi 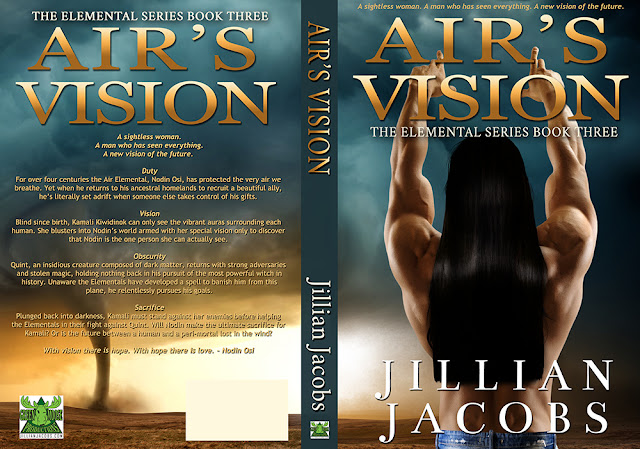 Series Starter on Sale for 99 Pennies

In the spring of 2013, Jillian Jacobs changed her career path and became a romance writer. After reading for years, she figured writing a romance would be quick and easy. Nope! With the guidance of the Indiana Romance Writers of America chapter, she has learned there are many "rules" to writing a proper romance. Being re-schooled has been an interesting journey, and she hopes the best trails are yet to be traveled.

You'll find a bit of her husband in her paranormal series, The Elementals, as he's a chemist and has to answer all her, "Could this really happen?" questions.

Water’s Threshold, the first in her Elementals series, was a finalist in Chicago-North’s 2014 Fire and Ice contest in the Women’s Fiction category.

Three things about her: She’s a Tea Guzzler, Polish Pottery Hoarder, and lover of all things Moose. Her current positions with Indiana Romance Writers of America are Program Chair and 2015 Conference Co-Chair. The genres she writes under are: Paranormal and Contemporary Romance with suspenseful elements.

Jillian is also part of an Indiana author group, which posts videos answering questions readers post for writers. Visit The Juicebox Dialogues on YouTube for some sassy video fun with romance writers.
Posted by Anonymous at 10:00:00 AM