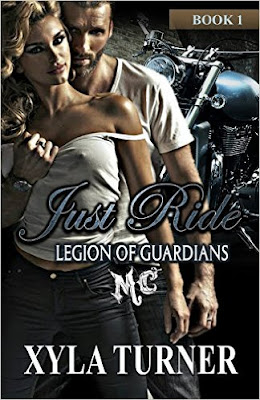 ***STANDALONE***
"I don't f*** bikers." Was Kylie's parting words to the sexy biker who happened to be the Guardian's MC President. She just moved back to the town she grew up and her first confrontation with with Razor, a biker. He was hot and had the potential of completely invading her life.

She attempts to pump the brakes on his roller coaster, but after her stalker scares some sense into her, she runs to the arms of the Legion of Guardian motorcycle club. Razor tries to steer clear of the young vixen, but he can't help his pull towards her.

How can he keep his creed with his brothers, the town and get his woman?

Take a spunky singing heroine and an extremely stubborn President of an MC and mix in laughter, with a splash of action, add moments of steamy passion and you'll get Just Ride by Xyla Turner.  The first book in the Legion of Guardians MC series introduces us to this fresh twist on motorcycle romance.  The MC motto is to protect those who need protection at all cost.  The club is made up of men from all walks of life.  This is Kylie and Razor's journey to finding love.Kylie grew up in the little town of Manor, Pennsylvania where her father IS the town's mayor.  She returns after ten years on the road with her band when she learns that her mother has cancer and needs someone to take care of her.  She meets the notorious womanizer Razor on her first night out on the town with her friends and leaves a lasting impression on the biker.Razor is in his forties and isn't looking for a relationship, especially someone so much younger than him.  His club and son are enough to satisfy his life, but when he sees Kylie he is intrigued by her and tries to get to know her only to be brushed off.  No one turns him down. The challenge has been set and he will win!The chemistry is love/hate in the beginning with Kylie fighting tooth and nail to resist Razor's charms.  The back and forth banter between them is entertaining and will keep you engrossed in the story as it progresses.  This wasn't your typical MC read, but it is still an entertaining and satisfying storyline that would compliment your library.