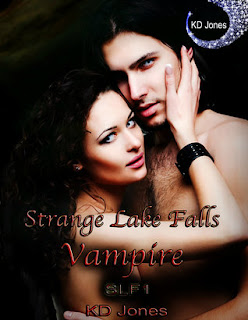 In one night, Jackie Copley-Tegan’s normal ordinary life turned upside down. Her teenage daughter, Samantha, falls for the wrong guy, which nearly ended in tragedy. Both mother and daughter thrust into a new and unfamiliar world where werewolves and vampires are thriving among humans.

Jackie will have to draw on every bit of strength she has in order to protect her only child, and learn how to cope with the changes in her life. Amongst the chaos a single piece of stability in the form of a young-looking, gorgeous five hundred year old vampire, rattles her to the core, and leaves her wondering just where her place is now.

Adrian Belliveau rarely finds a reason to enjoy his life anymore, so when the pretty woman who is meant to be his mate enters the picture he embraces his destiny with open arms. They both will get more than they bargain for, as they combat lust, love, and jealousy to put down roots in an ever-changing world.

Strange Lake Falls Vampire is the first book in the Strange Lake Falls series by KD Jones.  It is loaded with funny entertaining moments that will have you laughing and intrigued as you connect with the plight of our heroine, Jackie.  She is thrust into a situation by her teenage daughter, Samantha.  As a mother I totally understood Jackie and reveled in her ability to remain a power to be reckoned with among immortals and not bat an eye. She put them in their place, while protecting her child.  When she meets Adrian, she is lost in him immediately and tries to reason why a sexy handsome younger man like him would want to have anything to do with her older worn out self.Even though Adrian might look young, he's not!  He's a 500 years old vampire and is biding his time running his multi-million dollar company before going to ground.  When he unexpectedly meets the stunning Jackie, he knows she is his mate and for his kind it is a very rare occurrence.  This book is Jackie and Adrian's happily ever after journey and you don't want to miss reading a word of it!  I enjoyed this short fast-paced paranormal story and look forward to the next book in the series.   Ms. Jones continues to pique my interest with her characters and the continuation of their stories in her books.  I am very interested in what she has in store for Jackie's BFF, Mary!