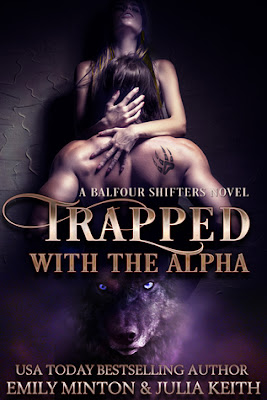 For eight-hundred years, Isabel McKay has been trapped in her own personal prison. She is forced to watch the man she loves live his life as if she never existed. Pain, betrayal and utter despair are her constant companions as she remains locked away.

Brody Balfour has spent the last eight-hundred years trapped in his legacy. He and his wolf both long for a mate, but he is beginning to wonder if it’s a lost cause. Loneliness, treachery, and possible failure are his constant companions as he endures in his birthright.

Finally able to leave her prison, she realizes she is trapped in her memories. She still loves Brody more than her next breath, but how can she forgive him for the things he has done? Jealousy and anger are her constant companions as she is haunted by her imprisonment.

Finally able to fulfill his legacy after finding his mate, he realizes he is still trapped in a nightmare. He loves Izzy more than life itself, but how can he convince her of that after all of the things he has done? Denial and helplessness are his constant companions as his past and future collide.

Overall Rating:  4.5 Rockin’ ★★★★☆
Can a werewolf prince's mate be the blacksmith's daughter? Is it possible for a witch's curse to last eight hundred years?  In Emily Minton and Julia Keith's, Trapped with the Alpha they take their readers from the medieval past to modern day, where the cause of an unsolved disappearance unfolds.  In this first book in the Balfour Shifters series an ancient curse is revealed and the reason behind it uncovered.   Two lovers, Isabel McKay and Brody Balfour are separated by invisible forces, but true mates will not be denied! To be by his side every day and yet not be seen.  Isabel has lived the life of a ghost for eight-hundred years, present in her mates life but unable to touch, feel or be seen by him.  Constantly watching him move through life, self-destructing and not remember her, his mate. Why is this happening to her, to them?  When she is finally released from her invisible prison, can she move past the things she has watched Brody do with other women?  Things that were meant just for her, his mate! Unable to find a mate, Brody moves through time with his clan feeling alone and without hope of ever finding his one.  Drinking, using women for sex delving into to the depths of depravity, but nothing helps his sense that he is missing something.  Suddenly she is in front of him, he remembers her, his mate.  Why was she taken from him?  How did he forget she existed? Evil forces are working against them, but who?  There are so many layers, with twist and turns in this book, that the reader will become ensnared.  The characters are bigger than life and the dialogue between Izzy and Brody is filled with sexual tension and drama.  I cannot wait to read more about this clan of werewolves and see where Ms. Minton and Ms. Keith will take them next.