Daughter of Isis by Kelsey Ketch 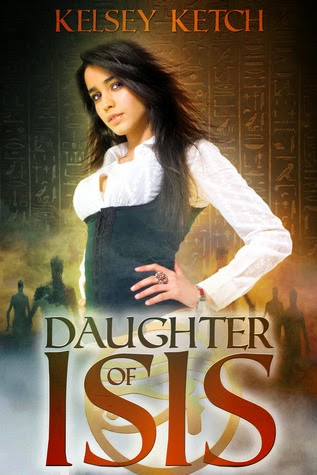 
“Her mouth parted slightly, waiting for Seth to breathe life into her own body, just like in the story. She wanted him to awaken her senses.”

The last thing Natara “Natti” Stone wants to do is to start anew at Setemple High School. She wished she had never left London. Yet the brutal murder of her maternal grandmother has made her life very complicated. The only clue related to her murder is an ancient, encrypted necklace Natti discovered after her grandmother’s death. And if trying to adjust to American life is not enough, Natti is being stalked by a mysterious, charming high school senior, Seth O’Keefe, who is annoyingly persistent in his attempts at seduction.

Seth O’Keefe is secretly a member of the Sons of Set, an order that worships the Egyptian god of chaos. Seth’s blessing from Set, his “charm,” never failed, except with one person: Natti Stone. Her ability to elude him infatuates and infuriates him, and he becomes obsessed with the chase. But the closer he gets to her, the more his emotions take a dangerous turn, and he risks breaking one of the most valued covenants of his order. The punishment for which is a fate worse than death.

The adventure this unlikely couple becomes engulfed in could cost them their lives and their souls.

Seth let out a deep breath as Natti waited, hoping. He ran his
fingers through his hair before his face came inches from her.

“The traditional story told to me began during the days before Ra
had left Earth. His council told him that if the goddess, Nut, bore any
children one would end his reign. So, to protect his power, he placed a curse
on Nut, one where she would not be able to bear children on any day of the
year.

“Desperate, Nut went to Thoth, the god of wisdom, for help. Thoth
knew that once spoken, the curse could not be recalled. However, he discovered
a loop hole, went to the moon god, Khonsu, and tricked him into giving up some
of his light. From it, Thoth created five extra days which were set between the
end of the old year and the beginning of the new.

“On the first of these days, Osiris was born. The second day was
set aside for the later birth of Horus, Osiris’s son. On the third day, the
second son of Nut was born, Set. Isis, Nut’s first daughter, was born on the
fourth day, and her second daughter, Nephthys, was born on the fifth. And when
they finally grew up, Osiris married his sister, Isis—”

“Ugh, gods.” Natti rolled her eyes. “Why do they always have to
marry their siblings?”

“Well, who else were they supposed to marry?” Seth asked.

“I don’t know. Maybe a mortal for a change.”

Seth crinkled his brow. “The gods are too great to marry a mortal.”

“And how would they know? Have they ever dated one?” Natti trailed
off when Seth placed his finger gently on her lips, letting them tingle under
his touch. Oh, how she was beginning to love that feeling. She let it consume
her.

Seth smiled. “Do you want to hear the story or not?”

Natti focused on his eyes. “You have my full attention.”

“Good. . . . As I was saying, Osiris married Isis, and together
they traveled the land. Now before Osiris, the people of ancient Egypt were
considered barbarians. Chaos reigned through wars and cannibalism. But when
Osiris and Isis spread their knowledge, the people learned to plant grains like
wheat and barley; how to tend and water the crops; how to cut the corn when
ripe and thresh grain; and then how to dry the crop, grind it, and make bread.
They even taught the people how to plant vines, and turn grapes into wine. For
his teachings, Osiris became the ruler of all Egypt.

“Set, however, was not pleased by his older brother’s rise to
power. So he laid out a plan to kill Osiris and rule in his place. Aided by
seventy-two of his most loyal worshipers, Set obtained the exact measurements
of Osiris’s body and carved a beautiful box that would only fix to his exact
size. Set then threw Osiris a grand feast, the greatest feast Egypt had ever
known. He called for only the best food the realm could provide and for the
strongest wine to be served. And the dancing girls, they were the most
beautiful creatures anyone had ever seen as their bodies swayed to the hypnotic
music—”

“That part of the story would get your attention, wouldn’t it?” Natti teased.

Seth’s cheeks turned a slight pink, and the corners of his lips
pulled into a smile. He let his finger slide across Natti’s lip again. A
delightful shiver silenced her thoughts.

“As the festivities continued, and Osiris drank, Set commanded that
the box would be brought to the grand hall. Osiris marveled at the rare cedar
inlaid with ivory, gold, silver, and painted figures of the gods and their
creations. Using his charm and deception, Set made a grand gesture. He offered
the box to whoever could fit inside. A few people tried and failed. When Osiris
finally took his turn, though, it fit perfectly, and the lid slammed shut, locking
him inside to die. Later, Set returned, dismembered the body into fourteen
pieces, and scattered them across the desert.”

The imagery that crossed Natti’s mind caused her whole body to
cringe. Seth took her wrist and rubbed his thumb over her hand. The soft
tingling sensation soothed her nerves, making her feel all warm and gooey
inside.

“When Isis heard what happened, she and Nephthys set out to look
for the pieces, gathered each one, and carefully wrapped Osiris in strips of
cloth. Unfortunately, this was not enough. The manner in which he had died had
prevented his entry into Amenti, the
place for those who have passed judgment. So, ultimately, Osiris would not be
able to rest in peace.

“However, Isis was clever. She crafted a magical serpent out of
dust and Ra’s spittle and placed it in the sun god’s path. The serpent bit him,
and Ra—being the most powerful god of all—commanded the poison to leave his
body. Yet his magic would not work, for the serpent was made from Ra’s spittle,
and therefore, he was unable to cure himself of the poison running through his
veins. He called upon Isis, a great healer herself, to withdraw the poison.
Isis, though, told him she could only heal him if she knew his secret name. A
large request, considering. You see, knowing a god’s true name gives the other
person their power. In this case, Isis would gain the power of creation
itself.”

Natti thought back her first day at Setemple High when Seth had
“stolen” her name in gym class. She understood exactly how the Egyptians felt.
It left her feeling violated and betrayed.

“As the pain of the poison spread, Ra finally submitted. He gave
her his name in secret and in confidence that no one other than herself shall
ever know. Isis agreed and cured Ra of her serpent’s poison.” Seth’s voice
became soft and slow. “When she returned to her husband’s side, she took him
into her arms, called on the power of Ra, and breathed life back into his body.”

Focused on Seth’s words and his eyes, Natti hardly realized how
close his lips had come to hers. They brushed up against her mouth, sending
sparks across her flesh. Her heart galloped with excitement. Her mouth parted
slightly, waiting for Seth to breathe life into her own body, just like in the
story. She wanted him to awaken her senses.

During her high school years, Kelsey Ketch could always be found tucked away in a little corner of the hall or classroom, writing her fantasy worlds and creating illustrations and maps. Today is no different, except now she’s writing in the break room at her office building or at the tables of the Barnes and Noble Café in Cary, North Carolina. She is also an avid reader, a part-time book blogger at Ketch’s Book Nook, and lives with her two orange tabbies and awesome and humorous flat-mate.
For more information, please visit her site at kelseyketch.com.