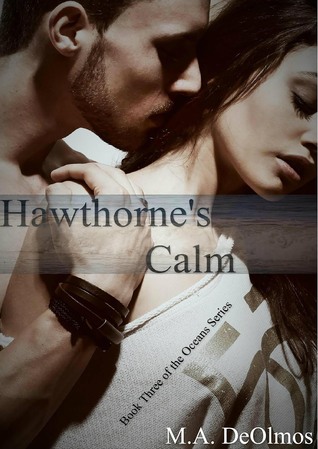 For some, life has a grand and beautifully wicked way of handing out life's lessons. Ocean and Lawrence Hawthorne can attest to this until they've run themselves to the ground. Yet somehow, within those lessons that leaves them emotionally battered and scarred, comes the birth of new hope. New life.
Ocean Hawthorne is a man of action and principal. His past drug addiction and healing wounds of causing his twin sister's death has and still continues to shape him into the fierce fighter he's become outside the MMA cages. Life has been cruel to him, yet it still managed to give him the one person who gives his lungs the sole reason to keep breathing…Livie Acosta.
Livie has been through the worst of the worst. She lost her mother to suicide, followed by her father, who was also her best friend, in an unexpected death; which only led to her own suicide attempt. She has fought all her life. Lost a lot of those battles, yet still manages to keep her head above the turbulent rising waters with her feet planted on the ground. She is growing into her own person while becoming a firm and steady anchor within the Hawthorne family. She will soon learn what it is like to be completely selfless and will be driven more than ever to rise above the demons who have haunted her all of her life. There is one thing that she will have to face head on whether she is prepared to or not. As a Hawthorne, she has no other option but to fight and conquer!

Lawrence Hawthorne has been the glue within the razor edged pieces of hearts his family is still trying to piece together. He's never met a challenge he couldn't overcome, test he couldn’t surpass, or women he couldn't protect. Livie his Sunshine was the first stranger to flip his world upside down in all the right ways, and now he has the beautiful and witty Dulce on his arm to keep him on his toes. He still has a lot to learn about his soul mate's past. Even though he is a powerful force of determination and love, he finds himself in a bind when his guilt over Dulce's past begins to tear away at his heart.

Will these fierce souls find the strength within each other to find the calm after the storm or will they continue to repeat their pasts, once again?

Hawthorne's Calm, the third book in M.A. DeOlmos' Oceans Collide series is another great hit. Once again, I was blown away by the story and the characters.  The way this author develops her characters and their plight is nothing short of elegant beauty.  I was drawn into the continued story of all four of the characters.  I could feel their pain and love while understanding their longings and desires.

Ocean and Livie are a beautifully strong couple who have come together in a way that would destroy most.  Although the road is rough these two are survivors.  From Ocean still dealing with the death of his twin sister long ago and his drug addictions, to Livie's attempted suicide, these two have been through so much.  When another unexpected occurrence happens, it brings them even closer together, with no more drowning.

Lawrence and Dulce are just beginning, but it seems like they've known each other forever.  There relationship is crazy!  One minute they are fighting and the next making up with hot steamy make up sex.  Their relationship is a good one.  They both need the other, like they need to breathe.

But the thing with the Hawthorne men...is they never give up and they are very stubborn.  And once you are a part of their family, they will never let you go.  This plot has a lot of twists and turns with OMG moments.  Yet in the end, it will leave you breathless and yearning for more.

I have been with the Oceans Collide story from the beginning and have seen these characters grow.  I have yet to be disappointed in any of the books.  I feel so in touch with these characters, like they are a part of my own life.  This author has a way with words that pulls you into the story and grips you tightly; crafting and creating a fictional world that is so real and important.  I'm in love with the Hawthorne men and women.  Like the ripples in the ocean, it's never ending.  Thank you for your beautiful words, Melissa.

Would I recommend this book: Yes!  Oh, yes!  This is a must read in the series.  If you need an uplifting story, then this will take you there!  However, I do recommend that you start from the beginning with series.  It's like chocolate, you never eat just one!

Would I read other books by this author: Yes!  I absolutely love Melissa DeOlmos!  She is an A List up and coming author.  Her way with words touch my soul.  Anything she writes I will read!