★•**•★ Spotlight Author Author L Wilder ★•**•★
I am a lover of romance novels, summer breaks, and unexpected quiet times when I can write without interruptions. Writing the Devil Chaser's MC Romance series has been a long time dream of mine, and it is still hard to believe that I actually did it. I loved writing about Bishop, and I am excited about continuing the series with Renegade. 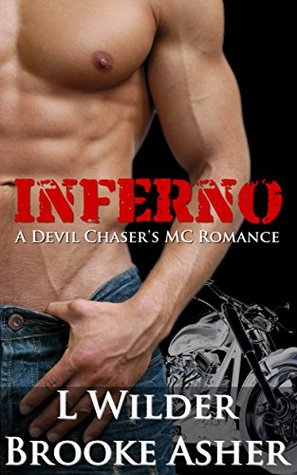 Bishop is the leader of the Devil Chasers’ Motorcycle Club, and a single dad trying to rescue his son from sins of his father. He doesn't have time to add a woman into the mix.

Bishop's past won't let go, and soon Tessa is swept up in the powerful, intense biker's world - and all the danger that brings. How hard can she hold on?

★•**•★Smolder (Devil Chaser's MC #2) by L. Wilder★•**•★
Smolders; smoldered; smoldering
1.: To burn slowly without flames but usually with smoke
2. (Literary)
a.: to feel a strong emotion but keep it hidden
b.: to be felt strongly by someone without being directly shown or expressed

Some connections are so intense, so deep that they span years. Starting with nothing more than a casual conversation, a look in the eye, a touch --but the point is they start. They smolder with a quiet intensity that eventually leads to combustion.

Taylor Roberts had been in love with her brother’s best friend for as long as she could remember. It was a love left burning in her heart--pointless, because it was love never returned.

Noah “Renegade” Hudson had life knock him down more than once. As Sergeant of Arms of the Devil Chasers, he’s known for not letting people get too close. The day he met Taylor, a change ignited within him, and he wanted to reach out and claim her. She was innocent and untouched though, so he made himself walked away.

When both Taylor and Renegade’s lives are rocked by tragedy, can they find comfort in each other’s arms? Or will old wounds and scars tear them apart forever?


In hearts where pain, love, and passion lie smoldering... will anything survive the blast when the fire sparks?

Lily-
Lily’s quiet life was upturned the day she found out her sister was dead. Now, she only has one thing on her mind- to keep her sister’s baby safe… at all cost.

A new life, a new job… a new world await Lily in Paris, TN. She’s determined to make it work. Not even the sexy mountain of a man, Goliath, is going to stand in her way. She had no idea why her presence has him so riled, but she really doesn’t care what he thinks. She’s there for one reason, and one reason only-to protect her nephew. A brooding biker is the last thing on her mind.

Goliath-
As Vice President of the Devil Chaser’s MC, Goliath’s main focus his my club. He’s worked hard to help make it legal and successful, and it’s finally paying off. He’s committed to the Devil Chaser’s, and his brother’s know he’ll do anything for them.

Goliath had no clue what he was getting into the day he matched wits with the sassy spitfire Bishop had hired to run the bar. All he knew what he was instantly captivated by her. He had an overwhelming need to protect her from anything or anyone that might cause her harm, including his brothers.


Sometimes fate intervenes when we least expect it, and forces collide so fast and so hard, they can’t help but Ignite.

Enter Giveaway at TSRBR Facebook Page
Posted by Anonymous at 9:00:00 AM