★•*❤*•★ Spotlight Author ★•*❤*•★
M.S. Willis is a romance novelist whose debut novel, Control, was released in 2013. Although currently writing in the romance genre, Willis has plans to expand her literary pursuits into multiple genres and has no fear conquering difficult subject matters in her writing. Willis is a native Floridian who is also a photographer and musician. When not absorbing herself in written, visual or musical expression, Willis is an adrenaline junkie, a 'closet' video game enthusiast, and an avid outdoors person and nature lover.

Standard Romance Story – Fireman Edition
Have you ever read a romance novel and wondered what it would be like to date one of the heroes in the stories? We’ve all been lost to the beautiful and touching stories, the funny and quirky antics of the characters, and the, sometimes, unbelievable love stories that fill the pages of those books.

Through the Standard Romance Story series of novellas, I would like you to embark on a quest of what it would be like – in REAL life – to date these heroes. Our main heroine, Jane, is put through the ringer as she fails, and sometimes, succeeds on her own dates with the typical men found in romance literature.

Each book is a new date with a new man – the REAL man – that is nothing like the characters you read about in books.

Follow Jane as she dates the standard romance guys in an attempt to find true love: The rocker, the biker, the billionaire, the tattooed bad boy, the firefighter, the lawyer, the vampire, the cowboy, the alpha, the teacher, the movie star, the professional athlete, the fighter and the captor.

Which one will finally win her heart?

There is a fine line between genius and madness…
Between love and hate,
Between right and wrong.

Joseph had created The Estate for her…
His wife,
The woman he chose to bear his child.
She was beauty unsurpassed;
And her song was unlike anything he’d ever known.

However, their love was a story that would not find a happy ending.

Joseph Fallen is the prequel novel to Madeleine Abducted - Book One of The Estate Series. Each book in the series is a stand alone novel with no cliffhangers.

She was meant to be his destruction…
A pawn played in a perilous game between
father and son…
Yet, her strength was more than either
man could imagine.
As Maddy learns to save herself…
She becomes the one thing that could
set the son free.

Madeleine Clark was raised to become a concert cellist. Sheltered and naïve, she remains hidden behind her music, a protection from the world around her. On the night of her first solo performance, Maddy accepts the admiration of a stranger and finds herself captive in a cruel and twisted power struggle between a sadistic father and his son, Aaron.

Seemingly dangerous and uncaring, Aaron manages the business operations of his father’s estate. Wanting nothing to do with the slaves kept at the Estate, Aaron refuses to take part in the deeper depravities of his father. Despite his resistance, Aaron’s father ‘gifts’ him with a petite, brunette woman he can’t refuse.

A bond forged in conspiracy and deceit, Aaron struggles to save Maddy by teaching her to survive in the world in which he’d been raised. An unlikely union, Aaron soon learns that great strengths can exist within small packages, while Madeleine learns that love and light can exist in the darkest of places.

Madeleine Abducted is Book 1 of The Estate Series. Each book is a stand alone and will not have cliffhangers.

Raised within a rival crime network, Hope Delacroix wanted nothing to do with The Estate. A fierce warrior, Hope is given no choice but to kill Aaron Carmichael. Caught in her attempt, Hope is captured by Aaron’s top guard in an effort to discover who sent her.

Ever loyal and protective, Xander Black’s sole objective is to defend Aaron and Maddy. Willing to do whatever is necessary, Xander gives in to darkness in order to force information out of Hope.

As Xander enslaves Hope to break her down completely, he learns that in the two years since Joseph Carmichael’s death, dissension still exists within The Estate.

“I find it ironic that your name is Hope…especially considering that you have none.” ~ Xander Black

WARNING: This book is intended or mature audiences only and has explicit scenes involving physical violence and sexual violence

Honor Bound:
She was meant to be his perfect pet.
Innocent, naïve and easily shattered.
Yet her mind was too fragile for what he’d imagined.
As Honor struggles to regain herself,
She becomes the one thing that could tear The Estate apart.

Honor Delacroix was raised in a rival network. Always looked after by her twin sister, Honor was an artist who lived her life in the ever-present shadow of The Estate. However, the life she’d always known ended on the night she was abducted.

Jason Arrington is an Estate Member who is working his way up the chain of command. Silently, he watches over Honor inside the mansion. Hopeful that she will improve, Jason sets out to help Honor remember the details of her captivity.

After being held by depraved men for four weeks, Honor has to put the pieces back together. Watched over by the members of The Estate, she fights to remember what happened when she was a slave. When Jason offers to help her, will Honor’s demons be too much for him to handle and will Jason be the man who can finally help her break free of the nightmare? 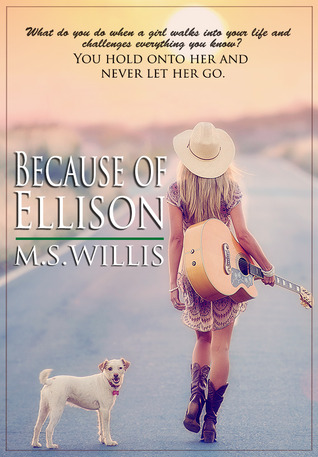 Because of Ellison-
When I was nineteen years old, I lived for sex, drugs and a good party. I had it all - good looks, a fast car and a hot girlfriend. Nothing in life was more important.

That was, until I met Ellison James….

Since the moment I first saw her she was a raging bull; tackling me in the mud and throwing out insults as fast as her tongue could form the sound.

She was snarky
She was rude
And she pissed me off like no other woman could.

I lived beside her for a summer and in the three months that I walked by her side...

She opened my eyes
She changed my life

Control- (Control #1)
Paige Stone lived anything but a normal childhood. Having been raised around an abused women's shelter operated by her parents, Paige was a constant witness to the tragedy and heartache suffered by women at the hands of the men they trusted. Out of refusal to ever allow that to happen to her,... Paige built walls around her heart at a young age. Those walls were only fortified when tragedy struck on her sixth birthday and took from her the only friend and love she knew. Now at 22 years old, and working as a private investigator, Paige is driven by a deep need for strength, independence and a stubborn refusal to accept help from another person. Surrounding herself with her three best friends, Paige never assumed that the autonomy she had worked so hard to build could be challenged.

That was, until Paige met Daemon Pierce.

Mysterious, strong-willed, and breathtakingly beautiful, Daemon seemed to instantly know Paige better than she knew herself. Paige is disgusted by Daemon's reputation as a womanizer, but becomes intrigued when she is unable to discover his background. Paige's curiosity about Daemon proves to be her downfall as she is swept up in his charming and arrogant pursuit to possess her in every possible way.


For the first time in her life, Paige will struggle for control while Daemon slowly dismantles the walls she has built around herself. Only time will tell who will be victorious in their battle of wills as Daemon teaches Paige the weaknesses within herself that she never knew existed. Paige stays one step ahead in her struggle against Daemon's controlling ways, but when tragedy strikes her life a second time, she has to choose; will she put her life in danger, or will she finally accept a helping hand?

Conflict- (Control #2) Conflict is the second book in the Control series. This description contains spoilers for those who have not read book one in the series, entitled Control.

Private Investigator, Paige Stone has always appreciated the independence of her life, however, her world was pitched upside down when she and her roommates were attacked and nearly killed. As a result of the attack by Chris, Paige now finds herself dependent upon Daemon Pierce for a place to live as she hides from Chris. Paige has never lived with a man before and demands that Daemon consider her a "roommate" only, even though it goes against her own desires.

Strong-willed and arrogant, Daemon Pierce has been working hard to protect Paige from Chris and from herself. Letting go of his life as a womanizer, Daemon tries to prove to Paige that she can trust him, even though he refuses to enlighten her as to his past. Daemon struggles to comply with Paige's ridiculous demand to be "roommates" and quickly finds that he has fallen in love with the girl who does nothing but push him away.

Chris is still on the loose and Paige becomes impatient at the amount of time it is taking the authorities to apprehend him. Paige takes it upon herself to hunt Chris down, while still refusing to ask for Daemon's assistance. When Paige discovers a message left by Chris, she devices a plan to locate him while keeping Daemon in the dark as to her plans. Paige's emotional journey once again places her in dangerous situations and when secrets are revealed and decisions are made, Paige has no choice but to look deep within herself to see if she can finally trust the man who will stop at nothing to save her.
http://www.amazon.com/Conflict-Control-Book-M-S-Willis-ebook/dp/B00DT707EK/ref=sr_1_5?ie=UTF8&qid=1410371595&sr=8-5&keywords=ms+willis

Conquer- (Control #3)
Conquer is the third book in the Control series. This description contains spoilers for those who have not read books one and two in the series, entitled Control and Conflict.

Private Investigator, Paige Stone’s world was shattered when she learned truths about her past. Following her discovery, Paige is forced into a situation where she needs to accept that, although a person can control their mind and body, the circumstances of their lives are far outside their grasp. As Paige struggles with coming to terms about events in her life, she is also put through the harrowing task of learning when to fight and when to let go.

Strong-willed and arrogant, Daemon Pierce agrees to help Paige on her hunt for Chris. As Daemon instructs her how to fight with both body and mind, he breaks down the final walls she has built around her heart.


Paige and Daemon’s emotional journey concludes as they learn the meaning of love and forgiveness, and ultimately...surrender.
http://www.amazon.com/Conquer-Control-Book-M-S-Willis-ebook/dp/B00ERFMUW0/ref=sr_1_1?ie=UTF8&qid=1410371595&sr=8-1&keywords=ms+willis 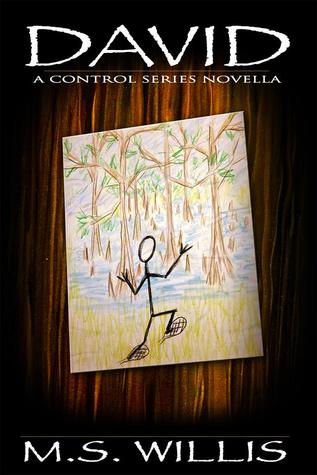 David-(Control #4)
She didn't get it right
I mean…the facts were correct
And let's face it, she perfectly described just how amazing I look; BUT

M.S. Willis didn't tell you about how, really, I should have been the hero of the Control series. Sure, Paige and the crew did the things they did, but they couldn't have done them if it wasn't for yours truly.

In case you don't know me, my name is David. Last name? Don't need one, I'm too fabulous to worry about small details. All you need to know is D-A-V-I-D…me!

So what's this book about? Pretty much everything you already know, except for one glorious improvement….

It's all David, all the time.


(Feel free to thank me later)