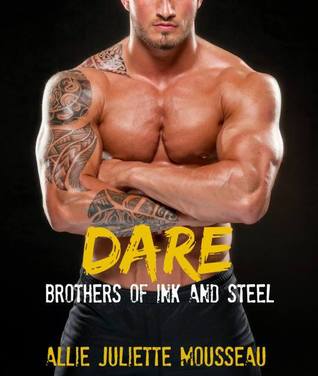 Josh North is UFC’s Light Heavyweight Champion—but he’s about to meet his match.

Sophie Garner is a single mom who’s been raising her daughter on her own, fighting for both of their lives ever since going into hiding to escape her abusive husband.

When Sophie gets offered the job of a lifetime as the exclusive massage therapist for Josh “The Jackhammer” North’s team, it’s difficult to say no to the outrageous salary—and the bet—that Josh proposes. But for Sophie it’s a risk that could cost a lot more than just her heart – if she’s found, it could cost her her life.

Josh wants to break through Sophie’s fortified walls, but is unwilling to put the jackhammer to his own and reveal his secrets and the side of him few have ever known or seen. To do that, he’ll have to confront the darkness of his past.

Dare is the first book in the Brothers of Ink and Steel series by Allie Juliette Mousseau and the first book that I have read by this author.  Her story is captivating and genuinely well written.  The focus is on a single mother’s struggle to survive daily and a MMA fighter/firefighter being hit over the head with the love stick.

Joshua Levi North is the sexy hunk-a-licious hero of our story.  He is well known in the circles he runs with.  He is every woman's dream...sexy tattoos, alpha tendencies, successful and single.   Sophie Garner is running from her past and an abusive spouse while at the same time trying to create a safe haven for her child.  Hurt during a fire rescue Joshua spends several weeks recovering in the hospital.  That's where he meets the sassy massage therapist, Sophie.

She isn't looking for a future with a man.  He isn't looking for a relationship. They both have secrets from their past that must be dealt with.  Together they begin a friendship that blooms into a beautiful love story.  Their journey is tremulously complicated from the beginning and the unveiling of them as a couple is tremendously satisfying.
Hero: Josh Levi North 4.5 stars
Heroine: Sophie Garner 4.5 stars
Plot:  4.5 stars
Steam Level: 4.5 stars
Cliffhanger:  No

Would I recommend this book:  Yes! This book is about a bad boy UFC Champion and no nonsense take no prisoner kind of woman so when they meet, sparks start flying!

Would I recommend this author:  Yes! I recommend this book for your library. It is a USA Today Bestseller and is worthy of that distinction.  The author's continuity leaves you blissfully happy with anticipation of her next book in the series.