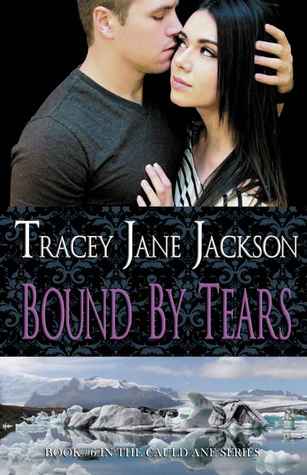 Jesska Shane has suffered a devastating loss, and now pushes away those who love her the most. Kaspar Baldursson is in search of answers concerning his brother's sudden disappearance. When he finds his brother--and his forever mate in the process--he must uncover the threats surrounding his family and protect his mate at all costs. Will Kaspar's love be strong enough to tear down the walls Jesska keeps building around her heart? Will he be able to save her before the secrets in their past destroy them all?

Just when you think a series cannot get better, you find out that it can!  Bound by Tears, book six in the Cauld Ane series is a remarkable example of that!  Tracey Jane Jackson has created another facet to an already enthralling storyline by bringing in a race that is older than the Cauld Ane. The characters are bigger than life, and the pages are filled with action, drama and mystery!

The Kaspar Baldursson is the King of the Kalt Einn, an ancient race that was the predecessor of the Cauld Ane. His people are thought to be extinct, but they are really hiding. Kaspar and his two brothers lead their people, but over time he has become isolate and solitary. When Kaspar finds out that his brother Ari had children with a human and was now a prisoner of the Cauld Ane King, he makes arrangements to take care of business. Starting with his brother! A mating between human and Kalt Einn was forbidden by law and so it was disturbing to find out that this had occurred. He also did not expect to find out that his forever mate was human!

Jesska has known grief and loss, enough to almost push her to the point of taking her own life! Her life changes when she meets Kaspar Baldursson, her niece’s uncle.  A man that seems to look into her very soul, and sees the deep scars buried inside.  But he has secret of his own. He is a man accustomed to taking control and leading others.  What does he want with her?  How can she keep her sister and niece safe from the danger that is slowly closing in on them?

Expect the unexpected and you will find that in this phenomenal story by the brilliantly talented, Tracey Jane Jackson! I am filled with anticipation waiting for the next book and where it will take me!