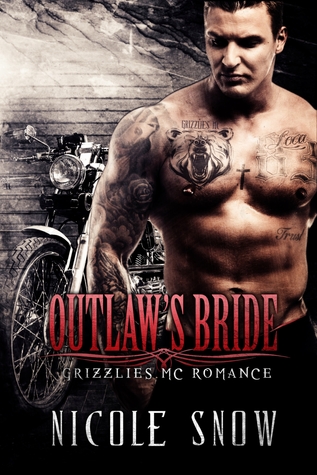 I HAD AN OUTLAW'S BABY AND KEPT IT A SECRET...

He's going to kill me when he finds out. I should've left Roman behind after our unforgettable fling two summers ago. I wasn't supposed to end up having his kid, always looking over my shoulder for the last man in the world meant to be a father.

But danger has a funny way of betraying a woman's best kept secrets, and reigniting old flames that should've died on a hot summer night.

Now, he's hellbent on claiming me in all the explosive ways that make my heart stop and my head spin. I'm losing it, or maybe just my panties. Every single pair.

An arranged marriage with the Grizzlies MC's biggest badass? I shouldn't want this so bad...

Forgive and forget? F*ck no.

I tried like hell to push her away, spent every waking minute on whores and booze. Then I found out what she'd hidden, and I lost my damned mind.

Sally's lies stole more years off my life than prison did. She owes me big. I'm taking her for payment, and I don't care what she's got to say about wearing my brand.

No chick makes a fool outta me. And I'm not fooling when I tell her I'll get my perfect wife, even if we're faking it all the way to the altar.

Give me a week. I'll conquer her spitfire tongue and remind her what it's like to ache desire. I'm not stopping 'til her lips are on mine, making her squirm the way she used to, begging me for more...

The Outlaw Love books are stand alone romance novels featuring unique lovers and happy endings. No cliffhangers! This is Roman and Sally's story in the Grizzlies MC series.

Young love can sometimes either break you or strengthen you!  He was her first love and the father of her child. No one could have prepared Sally for the heartbreak she would experience, when he was arrested and incarcerated, leaving her behind.  Life loving a member of a 1% MC is not an easy life.  How could she survive?  When she found out she carried his baby, decisions had to be made, tell him or live her life without him!

The club had saved his life!  He owed the club and his brothers his very life.  No woman would come between his club, his brothers and his freedom.  Roman’s life changed when Sally gave herself to him, all of herself!  It was a summer of new experiences, first love and eventually betrayal.  How could she forget him?  Not be there for him when he needed her the most?  But the biggest betrayal came after he got out jail, when he discovered love can hurt more than a bullet!  He knew she was his one, but can they move forward and leave the hurt behind?

Old enemies are returning, new ones are slowly infiltrating the club.  Who do you trust? Sally and Roman will need to unite if they are going to come out on the other side alive!