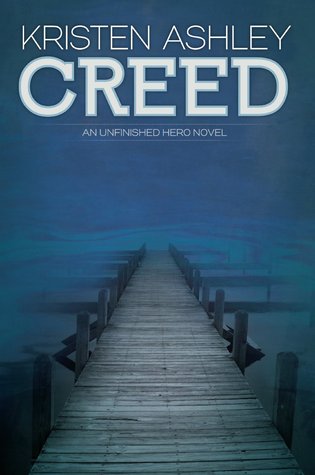 Way too young, eleven year old Tucker Creed and his six year old neighbor, Sylvie Bissenette, find they have something awful in common. Creed then decides he’s going to do everything in his limited power to shield his Sylvie from her ordeal. So he does and Creed and Sylvie form a bond that grows and blossoms with their ages.

They plot to leave their lives behind, the town they live in that will hold them down and the histories they share that, unless they break free, will bury them. Sylvie goes to their special place, Creed never shows and she doesn’t see him again until it’s too late.

With Creed gone, Sylvie is forced to endure a nightmare and do the unspeakable to end it. To deal, she develops a hard shell with sharp edges that very few can break through. So when Creed again finds his Sylvie, he discovers the girl he loved is locked away and he has to find his way back into her heart without getting shredded in the process.

When six year old Sylvie Bissenette snuck into the forest to escape her father and stepmother’s fighting and physical abusiveness towards each other, she met Tucker Creed. From that night on he became her best friend and protector and she became his as well. This is the story of two children that as they grew became more than just BFF’s, they became each other’s everything!  In Creed the second book in author Kristen Ashley’s Unfinished Hero Series we meet these unforgettable characters and get to share their hauntingly beautiful love story.

Fate will not be denied and love will always find a way to be, especially when two souls are meant to be together.  Sylvie’s life on the outside looking in seemed perfect, but what others did not see was the mental abuse and manipulation.  Her only bright spot was her best friend Tucker, who protected her and took care of her when she needed to get away.  He was her one and only love so when he disappeared on her eighteenth birthday, the day they were to leave their past behind, she felt abandoned.  Evil sometimes can work behind the scene to accomplish its agenda and try to destroy goodness.  After sixteen years of separation, Creed walks back into her life and refuses to be parted with her again.

True love is unselfish and willing to endure anything for the happiness and best interest of the one loved.  Creed was willing to do this for Sylvie even though he died a little each year without her. He thought his Sylvie was happy, cared for and married to another man. Discovering that none of that was the truth brought him to his knees.  Now that he has found her again, nothing or no one will take her away again.

Kristen Ashley creates stories and characters that will stay with you.  Her novels touch the heart, the soul and the mind of the reader and you will treat them like old friends that you want to revisit often.