Review of A Glimpse of the Dream by L.A. Fiore 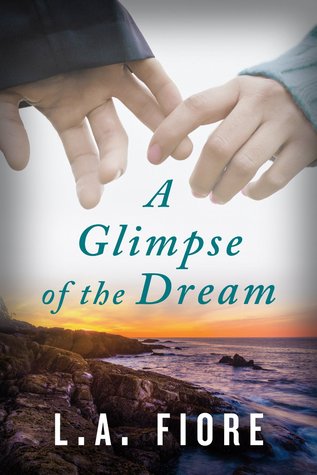 Teagan Harper is barely ten years old when she finds herself orphaned and sent away to live at Raven’s Peak, a Gothic estate on the seaside cliffs of Maine. Soon, though, her heartache and loneliness are tempered by a blossoming friendship with the only other child living at Raven’s Peak: Kane Doyle, only two years older than Teagan and abandoned by his mother. Over the years, the pair grows inseparable. First they’re pranksters and confidants, but eventually their feelings change, and best friends turn into soul mates. On the cusp of Teagan’s departure for a university in Boston, they share a glimpse into their happily-ever-after and make promises of forever.

But Teagan and Kane’s engagement and dreams of the future are shattered when Teagan returns home to find Kane gone from Raven’s Peak—and living with someone new. Devastated and heartbroken, Teagan cuts ties with her beloved adoptive home and tries to move on with her life. But years later, when the shocking truth behind Kane’s betrayal comes to light, Teagan must decide whether to embrace her new life and let go of her past once and for all, or fight for her dream life with the only man she’s ever wanted.

Love is limitless, kind, unselfish and forgiving.  In the novel A Glimpse of the Dream by author L.A. Fiore, we are given a glimpse of an unbreakable bond forged between two young children that grows into an incredible friendship and love that sustains them both through loss, tragedy and redemption.  Kane and Teagan are soulmates and this is their life journey.

Kane Doyle and Teagan Harper's friendship started at young age and blossomed into a beautiful, priceless gift that neither one could imagine living without.  When Teagan's parents are tragically killed in an automobile accident a close friend of the family adopts her and welcomes her to Raven's Point in Maine.  The castle becomes her new home and a place of healing.

The characters created by this brilliant author come to life on every page and their emotions flow through you as you read.  This was a surreal and beautiful novel.  I was lost in the storyline and enjoyed every last moment reading this story.  There were moments when I cried for the loss of their youth and the unbelievable potency of their love even when they were miles and years apart.  This is truly a remarkably well written romance that Ms. Fiore shares with us.  Angst, gut wrenching moments entwined with a limitless as well as timeless love are qualities of this must read book for romance junkies everywhere.